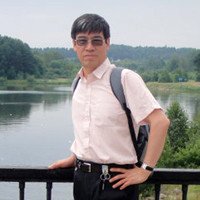 The notion of beauty in Chinese calligraphy is completely different from the one in European art. This specific system of beauty perception exists only in China. As we all know, human beings are the most beautiful creatures in the whole world. They are beautiful both on the outside and on the inside. Chinese calligraphy also has outer and inner beauty. A flexible brush dipped into ink touches a piece of white paper and leaves a “vivid” black imprint that possesses outer and inner beauty. When a calligrapher brushes over, he leaves lines and imprints that reflect speed, discontinuity, turns, the start and the end of the movement. This is why a good calligraphy work is just like a beautiful person: it reflects not only the inner and the outer beauty, but also its temperament and character. This beauty is closely related to the aesthetic perceptions of the calligrapher. Thus, we can say that any Chinese calligraphy work is just like an intelligent and tasteful person.

Further on, we would like to describe the three aspects of Chinese calligraphy.

(1) The usage of the brush is closely associated with humanness.

During the Yuan Dynasty in China, Chao Meng-Fu, the most famous calligrapher of the era, said: “Good calligraphy should outline how to use the brush”. And the usage of the brush is related to humanness. In ancient China, they said that the artist should hold he brush tightly, not only with the help of pressure, but also with the help of escalation, i.e. he should raise his brush with force, simultaneously adjusting it. When the pressure of the artist’s brush alters, the calligraphic imprints on the paper can be thick and greasy, or thin and small, or soft and dry, or hard and juicy. These alterations reveal the tonality, which, just like music, completely reflects beauty and individuality, reveals the changes in the artist’s mood and character and expresses its own perception of calligraphic beauty. This is why it directly displays humanness.

It then flows from the brush into the human beauty, and, similarly to human skin, human beauty is born. This beauty of human skin reflects vividness, muscularity and human strength. Only healthy muscles and skin can display human beauty, and a sick, impotent, weak body or skin cannot display any beauty. The strength in calligraphy, as in a human being, reveals its health in its handwriting. It can convey different beautiful things, character, and temperament or even, as they say, intellectuality. A famous Han Dynasty calligrapher, Tsai Yung, once said: “One should make the brush follow the paper like a person follows the road”. He compares calligraphy to human walking – this fits well. When a person walks, they lift and put down their legs. The same can be said about a calligraphy work, where the brush should rise and fall gradually and freely. And this perception of calligraphy results in its close relation to human beings and humanness. This is why, for thousands of years; the Chinese have been looking for human beauty in its comparison to the usage of the brush.

(2) The composition of calligraphic lines is also related to humanness.

The composition of lines – hieroglyph – is a very important point in calligraphy. In ancient times, our calligraphers found a connection between the composition of hieroglyphic lines and humanness. The greatest calligrapher Yang Sizhi once said: “A calligraphy work cannot do without muscles and skin, in other words, without life. When one dot in calligraphy is wrongly placed, it is like a pretty girl with a damaged eye. When one line is wrongly placed, it is like an athlete with a broken arm”. Thus, we can learn that the ancient perception of calligraphy is just like the perception of humanness. It was said once upon a time that the calligraphic hieroglyphs should not be like dead bodies, that they should be like living people who have arms, and legs, and lively eyes, who are energetic and strong, in other words, full of health.

That is why any line in calligraphy should have its usual aesthetic relation to humanness.

We can create a first-rate calligraphy work only if we share this perception, and this all-knowing perception is all about humanness and vividness. It is specific Chinese calligraphic aesthetics. A first-rate work does not only evoke memories about certain beautiful people, it makes us think about different people. All the hieroglyphs should be similar to human beings – a row of soldiers or dancing moves. They have not only beautiful arms and legs, but also beautiful bodies and body movements. This is the vitality of calligraphy. The best calligraphy work should display vitality and humanness. As a result, we will have a calligraphic character, temperament and even vivid elegance. Thus, the humanness gave the calligraphic composition its natural Beauty, decorative Beauty and characteristical Beauty. All these features are harmonically composed in a calligraphy work.

(3) The usage of ink is related to humanness.

Chinese calligraphy cannot be separated from ink; the quality of ink and the delight in ink play a very important role in a calligraphy work. In ancient China, the ink used in calligraphy was supposed to be thick, black, and even shiny. They say that the colour of ink, just like human skin, can speak of its sickness, unhealthiness, bloodlessness or about its strong health. The most beautiful calligraphy can be compared to human eyes, especially to the eyes of a child. Children’s eyes are the clearest and the lightest. The ink in calligraphy should be shiny. The usage of ink is also compared to blood. The ink in calligraphy is like the blood in a human being: it reflects not only its radiance, but also inspiration and vividness of calligraphy. In first-class calligraphy ink should be impressively clear, fresh, thick and black, like sparkling eyes. Writing in this ink shines on paper and brings delight, which passionately and vividly displays humanness. A successful calligraphy work, with strong muscles, beautiful skin and excellent physique and body movements, makes us feel delighted with all the verses, as if they were heroic soldiers, who walk, run and fight in arms.

These hieroglyphs are not dead, they are alive, lively – in other words, they are like harmonically composed human organs. Calligraphic perception of beauty is like a human being who has to have a healthy body, nice muscles, good skin, subtle body movements and sparkling eyes.

All of the above describes in three ways the aesthetics of calligraphy as related to humanness. We can say that calligraphic beauty is human beauty. 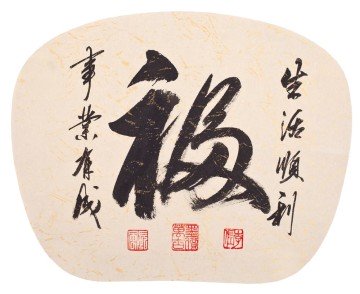 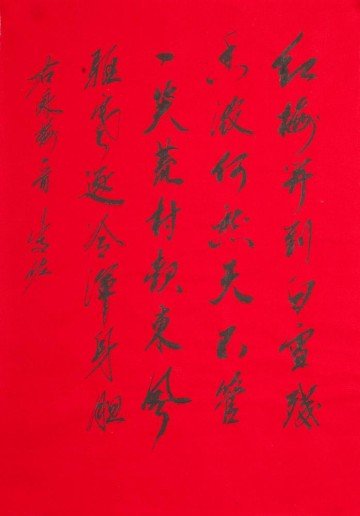 Poem about May flower. Part 1 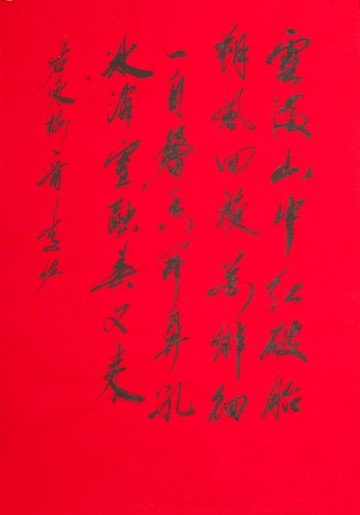 Poem about May flower. Part 2