The handwritten Constitution of the Russian Federation on display

On December 12, Russia holds various events across the country to celebrate the Constitution Day. Educational and cultural institutions in the Russian cities are particularly busy with the above, offering the classes of legal science, round tables, topical presentations and exhibitions. Starting from 2013, every year personal appointments have been taken in the Russian President’s reception offices, in state authorities and local governments.

The World Calligraphy Museum also steps in to raise awareness of the primary national law, which is fundamental to the democratic development of the Russian state. For this purpose, it will exhibit the gem of its collection – the handwritten Constitution of the Russian Federation. This masterpiece was created by a group of calligraphers led by Petr Chobitko, a calligraphy artist, trainer of the Stieglitz Academy in Saint Petersburg, and a member of the Union of Artists of Russia.

Director of the World Calligraphy Museum, Alexey Shaburov, ideated the handwritten Constitution on the 300th anniversary of the Russian type – in 2007, while discussing an ambitious “International exhibition of calligraphy” project designed to revive the art of calligraphy, lost in Russia. The creative process was split into several stages and took five months – between the end of May to early November 2007.

Petr Chobitko recalls: “The first and the most important stage was creating a handwritten script. It took a significant effort to produce a shape that could absorb traditions while meeting the requirements of today. It had to be felt that the script was written by hand rather than printed digitally or any other way. The second stage included the immediate cooperation with the designers from “Rare Book from Saint Petersburg” publishing house. We defined the shape, or the page composition and aspect ratios, text ratios, margins, line sizes, and spacing. Since then, the writing of the text of the Constitution commenced. It all started with marking the text on a page for a proofreader to check and to be then written. The last closing pages were written and submitted on November 10, and they proved to be the most difficult, probably due to the general fatigue. The very last pages had to be re-written three times.”

We usually see the Constitution as a book printed in unified and standard letters, a hardly attractive fashion. The handwritten Constitution exhibited in the museum has been enriched with a complex and diverse rhythm. It was written on a handmade paper with natural catfish ink, red coral pigment, wild bird feathers, and leaf gold. Its dimensions are no less impressive – 32.5 x 48.5 cm.

As we know, following the election the President of Russia says an oath holding his right hand on the Constitution of the Russian Federation. It makes a significant moment in the presidential inauguration. This is why the handwritten Constitution of the Russian Federation can be treated not only as the primary law but also as a historical and cultural symbol of Russia

More details about the process of creating the handwritten Constitution of Russia can be found in Petr Chobitko’s interview. 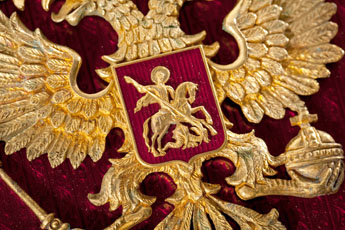 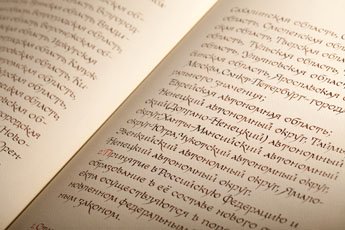 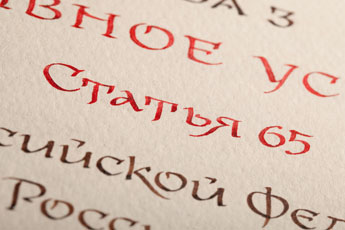 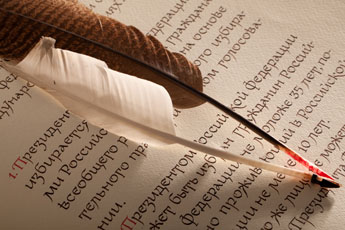