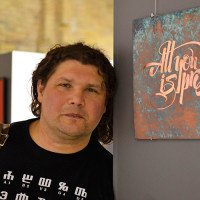 Calligrapher artist, art director in the graphic design studio, teacher at the Kharkov State Academy of Design and Art, member of 4thBLOCK association of graphic designers

In the Middle Ages there was a popular legend about a bandit who came to a monastery and became a book copyist. When he died God, for every letter he had written, forgave him one sin. Finally, the number of letters surpassed the number of sins and he was saved. This tale shows how valuable the labour of copyists was in the pre-printing era. Such sensible, sympathetic treatment to the labour of writing and the written word was typical mainly for Near Eastern culture which encouraged European and not European medievalism. Sacred text demands a complex understanding. Even to a secular mind calligraphy is more than beautifully written words. It’s a sign! A sign of the human ability to turn ordinary things into something unusual, when form represents itself, author and the current epoch regardless of whether it is a love letter of the 18th century written in a sophisticated style or strict Syrian Peshitte.

The most valuable art of calligraphy is the link of letters living forms with content, symphony of meaning they carry and the way it turns into material.

For me the art of calligraphy is like the work of an icon-painter. The calligrapher fights with chaos and nonsense of the world with no sword but with a sharpened pen thus, educing senses and images by mixing the white surface of paper with the black mass of ink in a peculiar way.

Even a Chinese calligrapher painting characters with a stick on a mirrorlike surface doesn’t create post-modern expressive calligraphy but tries to modify and realize an element of nature.

A script-letter is a very exquisite instrument for identifying the outlook of this or that epoch. The basis of a letter is the grapheme-carcass-skeleton, to spoil means is to not understand writing (although post-modern managed to solve this problem!). Other “meat” changes very slowly. The type of letter’s “muscles” depends on many factors: letter technique, world fashion, architecture style, social changes etc. Some cultures are very conservative and are not eager to change their costume (Hebrew), others boast variety of forms.

Anyway, modern people in an industrial atmosphere and geometrically right ranges of grotesques want their eyes to relax on a letter-form remembering the scratch of a goose pen, structural resistance and human warmth.

The art of calligraphy sends us to our historical memory thus linking times and is very attractive!

Calligraphy is a step forward into the past or a stroke back into the future! 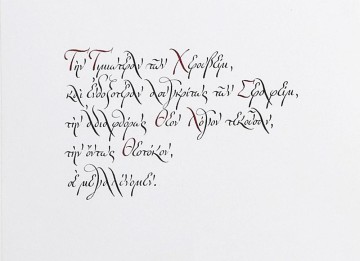 More honorable than Cherubim and beyond compare more glorious than Seraphim... 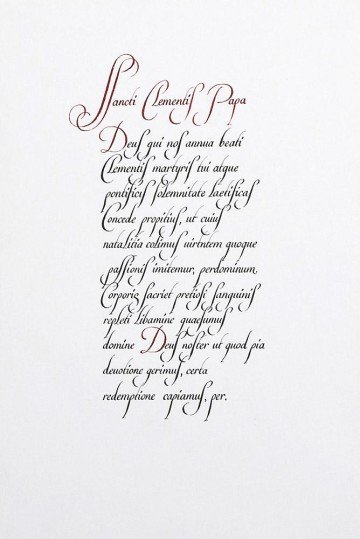 Excerpt of the mass to the St. Clement of Rome 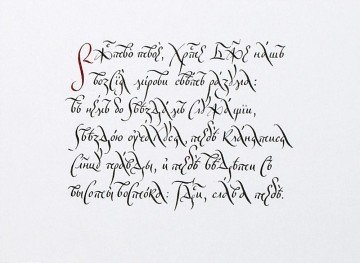