Calligraphy and The Left-Handed Scribe

Most calligraphy teachers aren't sure what to do with us lefties and I almost feel guilty when I walk into a classroom and admit that I'm left-handed. In the general population, around 10% of us are left-handed. In calligraphy classrooms, however, we are a rare and troubled group.

Curlers and non-curlers approach calligraphic strokes in very different ways. What works for a curler is almost never useful for a non-curler and vice versa. Often times, things that are obvious to right-handed calligraphers elude us lefties. It can be extremely frustrating to watch a righty easily manipulate the pen when all we can do is smudge, smear and make wobbly marks on the practice sheet! 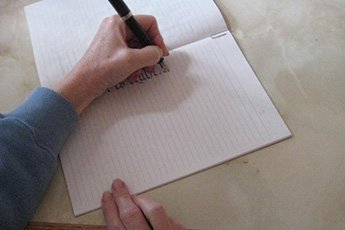 First off, I'm a curler. Needless to say, this makes calligraphy quite a challenge. Here's a picture of my awkward hand position (and my liver spots). Usually, following a period of extreme frustration, I resort to dissecting how a right-hander does whatever it is that's plaguing me. When I'm lucky, I come to some kind of understanding and figure out a way to mimic or reinterpret their movements to work for me.

After several years of classes, workshops and practice, I've had a few insights I'd like to share.

Here is a list of left-handed calligraphy reference books I've found helpful. They contain more information than any beginner could possibly digest, so reading and re-reading as I gain more experience is a good way to pick up tips and tricks.

Calligraphy is difficult enough without the added burden of being left-handed. However, some of us enjoy the struggle and are stubborn enough to keep at it. Thanks for taking the time to read this, if nothing else, you'll understand why you're unlikely to find yourself sitting next to a lefty in a calligraphy class! 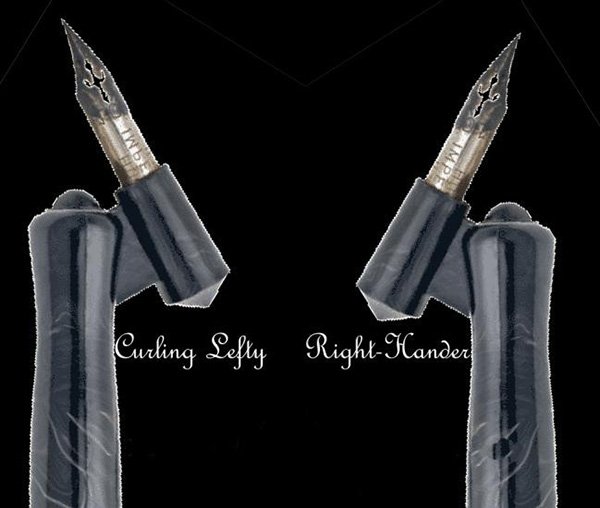 Calligraphy and The Left-Handed Scribe