When Galileo targeted the skies with his telescope 400 years ago, he only wanted to get a better look at their visible sectors. This so-called visible, or optical, light that Galileo observed represents just a mere slice of the entire spectrum of light we now know radiates across the Universe.

Today, astronomers build telescopes and detectors that can see far beyond the type of radiation we can detect with the human eye. From Earth to the Universe (FETTU) is a collection of astronomical images that will showcase the most dramatic views of our Universe. The images represent the incredible variety of astronomical objects that are known to exist — planets, comets, stars, nebulae, galaxies and the clusters in which they congregate. The collection was exhibited in over 250 countries throughout the world in 2009 and 2010. These exhibits, held in public parks, airports, art centers and at other unique sites, will bring the wonders of the Universe right to you. Over 60 countries are scheduled to host a FETTU exhibit. 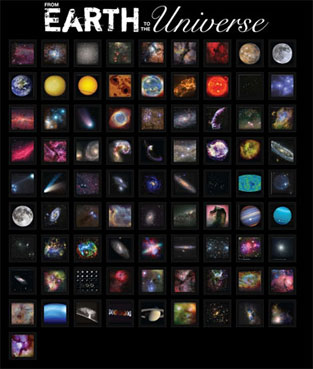 It is the first experience for Russia: in Moscow FETTU is organized by the MVK Company, PrimeFoto photo lab and Fujifilm. The project is supported by the International Astronomical Union (IAU) and UNESCO and held within the International Year of Astronomy. 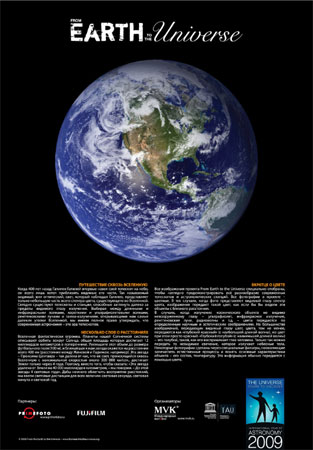 We, as organizers, appreciate not only its aesthetic, but also its cognitive, educative influence. By realizing this project we try — and this is our mission — to help people feel themselves different and probably change their life perception. Looking at all these galaxies and star clusters, imagining how different and colorful our world is and so is every person will undoubtedly help you open new vistas with our project! Become part of the Cosmos! The FETTU photo-collection will be demonstrated within the framework of the II International Exhibition of Calligraphy. It is scheduled to be held from October 14 to November 14, 2009 in pavilion 7a of the Sokolniki Museum-Educational Complex. Exhibition working hours: 10.00 am— 8.00 pm