Home  /  About project  /  Friends of the project

The building where the institute is located was built in 1959 according to the blue prints of architect Mark Grigoryan. In front of the building there is a monument of Mesrop Mashtots, originator of Armenian writing (sculptor G. Chubaryan). The interiors of Matenadaran are rich in sculptures, ceramics, frescos and mosaic.

In the basement store of the building there are the archives. The working temperature, humidity and hygienic range preserve the manuscripts from diseases and spoiling. The building also has the laboratories, prepared for work with manuscripts, their disinfection, restoration, photographing, research and other things.

Upstairs there are the exhibition halls, research offices, a reading hall and catalogues. A rich library of printed books allows the researchers and specialists to do research in various areas of national culture.

The exposition of Matendaran includes ancient Armenian manuscripts, fragments of papyrins of the 5th-6th centuries, manuscripts of the 9th-10th centuries and subsequent centuries, petrified manuscript fragments found in caves. The chronological order of the exposition represents the national writing culture from the time of the rise of handwriting to the 19th century.

Alongside 13, 000 Armenian manuscripts the archives contain 2, 000 manuscripts in Russian, Hebrew, Latin, Arabic, Syrian, Greek, Japanese, Persian and other languages. The collection of Matenadaran provides a valuable historical background for studying Armenian history and culture and neighboring nations of the Caucasus, Near East and Middle East. The Institute contains the manuscripts of the 5th-18th centuries and a unique collection of early printed books of the 16th-18th centuries, chronicles of ancient and medieval Armenian historians, writers, philosophers, mathematicians, geographers, doctors, translations of Ancient Greek, Syrian, Arabic and Latin scholars and a number of works which didn’t survive to these days in the original. The Institute museum showcases numerous specimens of Old Armenian writing and miniatures. Many manuscripts have immense artistic value (e.g.: Lazarevskoye Gospel, 887; Etchmiadzin Gospel, 989; Mugni’s Gospel, 11th century).

Most manuscripts have full imprinted bindings; a part of them is enclosed in silver casings (the most ancient one was made in 1255). The papyrin manuscripts are illuminated with miniatures which themselves are pieces of art.
The first volume of the Matenadaran’s catalogue was issued in 1984. At present time the collection is being replenished with new items.

The researchers of Matenadaran explore and issue Armenian written records, study the problems of textology, do source studies, explore paleography, medieval book illumination, historiography, make scientific translations of written records into Russian and some other languages. Since 1940 the Banber Matenadarani (Matenadaran Herald) has been published in Armenian with summaries in Russian and French. 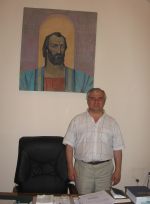 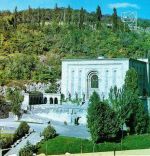 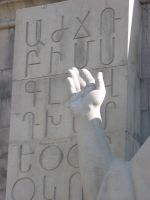 Armenian alphabet
(Detail of Meshrop Mastots’ monument)
Back to list