Home  /  About project  /  Friends of the project 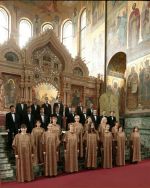 The Chamber Choir of Smolny Cathedral (formed in 1991) is one of the most famous choir companies in St. Petersburg. The choir is only at the beginning of its career but it has already gained recognition in St. Petersburg and other cities.

The choir often performs at Smolny Cathedral, St. Isaac Cathedral, Sampsonievsky Cathedral, Church of Savior-upon-Blood, the Philharmonic and Chapel Halls, and takes part in a plethora of festivals, including the All-Russian Choir Assemblies and Easter Festival. The Chamber Choir of Smolny Cathedral is a modern musical company. Its vocal manner combines European delicacy and voice-leading graphics and traditional Russian intensive tonal quality.

The choir's origination clashed in time with the crucial reorganization period in Russian concert activity. The time of changes turned out to be especially beneficial for the choir's performance, for the ideological barriers, that used to restrict its repertoire, were abandoned. The Smolny choir, headed by the reputable conductor and Professor of the St. Petersburg Conservatory Stanislav Legkov, contributed to the return of Russian spiritual musical masterpieces that had been marginalized for years. The basis of the choir’s performing style and view is formed by the music of Bortnyansky, Berezovsky, Vedel, the largest representatives of the 18th century professional choir culture of Russia and Ukraine, 19th century canons by Chesnokov and Arkhanghelsky; and Rachmaninoff and Tchaikovsky’s genial music. In 1994-2000 the choir was led by Andrei Petrenko; and then Edward Krotman took the helm.

Chamber Choir of Smolny Cathedral 2004 was a crucial year for the choir. Vladimir Begletsov, Honourary Artist of Russia, joined the choir as its Chief Conductor and Art Director. His young age (the maestro was barely 40 then); brilliant education (piano, choir and symphony faculties at the St. Petersburg Conservatory); work experience with the Academic Chapel and long-term teaching experience at the M. I. Glinka Song-School and splendid talent, energy of a born leader and the ever-lasting source of creative ideas met with grand success. In addition to academic pieces by Bach, Mozart, Haydn, Mendelson and Brahms, the Smolny Chamber Choir often performs 20th century music and rare pieces from ancient times: from 18th century chants to recent opuses by Desyatnikov. The choir successfully performs extremely difficult musical scores by Taneyev, Shostakovich, Stravinsky and Schnittke. The Smolny Choir was the first to perform Krzysztof Penderecki’s Utrenja (Morning Prayer) and that same year it performed the premiere of Sviridov’s “Juvenile’s Whip” cantata.

The day-to-day skillful performing manner of the Choir corresponds with the variety of its leaders“ interests. Almost each of the thirty-two chanters (all of them are Conservatory graduates or students) can perform a solo part. The word “chamber” in the name of the choir presupposes virtuosic sound reproduction. So far the Smolny Choir together with the Glinka Song-School Boys” Choir splendidly performs such grandiose musical pieces as Verdi’s Requiem and Rachmaninoff’s Vespers.

Greetings of Vladimir Begletsov, Chief Conductor and Art Director of the Chamber Choir of Smolny Cathedral