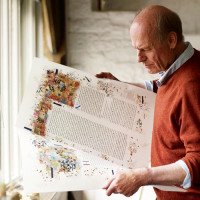 Calligrapher and illuminator. Artistic Director and principal illuminator of The Saint Johns Bible

From 1998 till its completion in May 2011, Donald Jackson was the Artistic Director and principal illuminator of The Saint Johns Bible. From his scriptorium in Wales, he oversaw scribes, artists and craftsmen who worked with him handwriting and illuminating the seven volume, 1,150 page book on vellum.

From 2007 to 2012, Jackson was Artistic Director of the $40,000,000 publishing project centred on the Heritage Edition, facsimile volumes of The Saint Johns Bible. Many are now in collections of widely varying institutions and faith communities around the world.*

He was awarded a scholarship to Bolton College of Art aged 13 and at 20, as a graduate student, he was appointed visiting lecturer at the Camberwell College of Art, London. In 1974, he was chosen to take part in the Victoria and Albert Museum’s first International Calligraphy Show after the war and was appointed a scribe to the Crown Office at the House of Lords. As Senior Illuminator to the Crown Office of Her Majesty Queen Elizabeth II, he is responsible for the creation of official state documents. In conjunction with a wide range of other calligraphic projects, he executes Historic Royal documents including Letters Patent under The Great Seal and Royal Charters.

Past Chairman of the Society of Scribes and Illuminators, and Past Master of the Worshipful Company of Scriveners of the City of London. His personally innovative work and inspirational teaching, together with books, documentaries and exhibitions in Europe, Scandinavia, North America, Puerto Rico, Australia and China have led to his being widely acknowledged as a seminal influence on the growth of Western calligraphy over the past 50 years. Since 2005, completed sections of The Saint Johns Bible have been on continual exhibit in museums and galleries throughout the US and Canada as well as the Victoria and Albert Museum in London. On four occasions it was exhibited alongside The Dead Sea Scrolls.

‘When I was a nine year old, desire led me to copying ancient scripts and decorated letters. I loved the feel of the pen as it touched the page and the breathtaking effect of the flow of coloured ink as its wetness caught the light. Those sensations, which I still experience as I work, are what seem to select the shapes and colours of my designs or words. The quill, not my conscious thinking makes the choice. The continual process of remaining open and the accepting of what may reveal itself through hand and heart on a crafted page, is the closest I have ever come to God.

In making the Bible as a celebration of the Word of God for the twenty-first century in modern scripts, I realise it is the thing I have been preparing for all my life. The Bible is the calligrapher’s supreme challenge, (our Sistine Chapel), a daunting task. So, the pursuit of closeness to God; a lifetime’s dream; a fearful challenge.’ 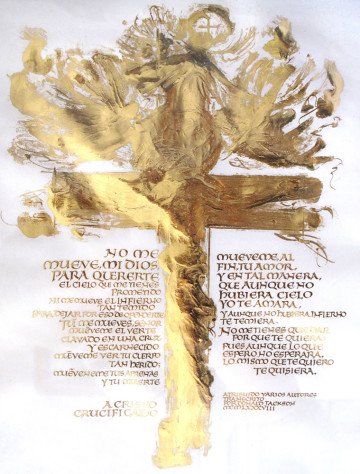 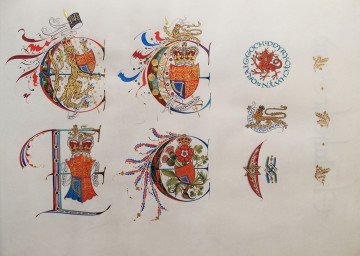 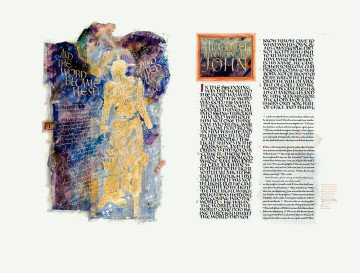 John Frontispiece ‘And the word was flesh’ 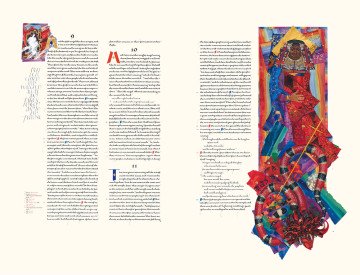 The Woman and the Dragon 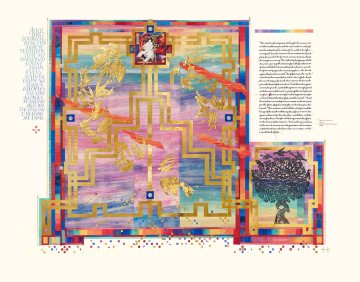 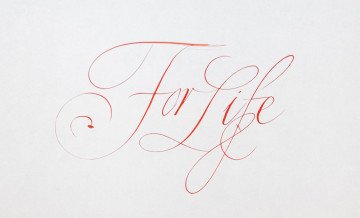 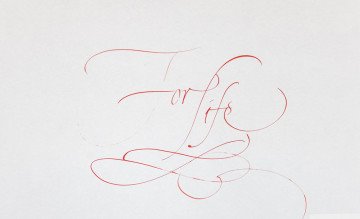 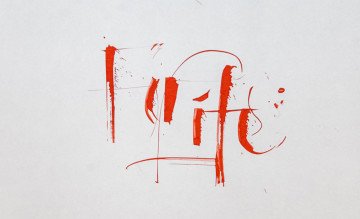 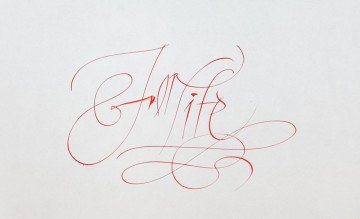