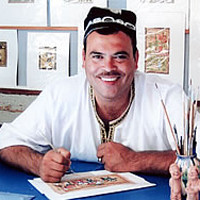 Islamic calligraphy is an area of ornamental fine art, both independent and decorative. It is an important cultural attribute of Islam, which embodies the elements of the pre-Islamic legacy. The conventionality of artistic language, characteristic of calligraphy, which in the framework of apophatic tradition presumes the transformation into an abstract image at the expense of the loss of the primary meaning, makes it possible to treat Islamic calligraphy as ornamental art. Outside the context and content, calligraphy has two functions – artistic and ornamental, and religious and mystical.

When we hear the word “calligraphy”, we immediately think of the art of the Arabic script ornament. This art appeared as a result of a long development of the Arabic alphabet in the 6th-10th centuries. The appearance and development of calligraphy in Islam are subject to the idea of a similarity between the universe and man: they both are texts in the direct meaning of the word; they are a combination of well-ordered phonetic or graphic characters. The Sufi tradition is very specific about it. As such, in Zubdat al-Haqāyiq (“Cream of the Truth”) tractate, its author Aziz Nasafi (13th — beginning of 14th century), having said that the man (dervish) is “a small world, and the whole world is a great world”, and that the man is “the list and the sign of both worlds”, later on develops this though in the following way: “Know that the Almighty, having created all the things in existence, named them the world (alom), as the world is the sign (alamat) of His Existence. The existence of the world involves His knowledge, will and power in the form of sign and the form of writing (nome), the reason it is the sign he called it the world, the reason it is the writing, he called it the book (kitab). Then He commanded: anyone who reads this book shall know Me and My knowledge, will and power. We were too small, the book was too large, and our sight could not cover the edges of the book and all of its pages. The [Almighty] Teacher (ustad), seeing our weakness, made a list of that world and rewrote [the book] in brief. The first one he called the greater world, the second one the lesser world; the first one he called “the greater book”, the second one – “the lesser book”. Everything there was in the greater book He wrote in the lesser one with neither additions nor omissions, so that everyone reading the lesser book would be [thus] reading the greater one (and, as a result, knew God. — V.B.)”

Creation in Islamic (Sufi) tradition is a process of writing following the divine Commandment (Word) “Let there be!” (kun), performed by the Supreme Pen on the Preserved Tablet. The very letters of the Arabic alphabet are full of ontological meaning. Thus, the letter ““alif” (a) symbolizes the absolute transcendental divine Oneness, or Tawhid, the letter “bā”” (b) — the mortal plain, the beginning of its creation, to be more exact, the letter “wāw” (w) — the ties of the mortal plain to the divine Unity, and so on. The process of evolution of many forms of inhabiting the mortal plain from Tawhid can be displayed as the emergence of different variously shaped letters from the initial ““alif ”, written as a simple vertical line. Fariduddin Attar gives the following description of their origins: when ”“alif “bent over, the letter ”dāl” (d) came to exist, when it bent the other way — the letter “rā”“ ®, when both of its end bent upward — the letter “bā””, when it bent as a horseshoe — the letter “nūn” (n), and so on. Ibn “Arabī gives the list of all 28 letters of the Arabic alphabet, each of which corresponds to a certain Name of God, which, in its turn, relates to this or that ontological or cosmological levels (the godhead, unknown plains of Existence, kinds of living creatures, kingdoms of nature, the four elements, the nine firmaments, the Pedestal, the Throne, the Form, the Universal Body, the Substance and the Nature).

The letters “comprise” not only the macro-, but also the microcosm. They are reflected in shapes of body parts and facial features, and all the letters can be read on the human body. The body spells the word “Muhammad” — the Prophet’s name, the prototype of both micro- and macrocosm. We have already mentioned the face as a reduction of microcosm. All of its elements, corresponding to the ontological entities, also correspond to certain letters. For instance, the mouth — to the letter “mīm” (m), the eye — the letter ”ṣād“ (emphatic s) or ”“ayn” (which means both “eye” and “being”), curls and locks of hair — the long, “wawy” letters “dhāl” (d) or “jīm” (j) and so on.

The purely anthropomorphic type of correspondence was prevalent in teachings of Al-Ghazali (11th century a.d.) about the hierarchy of three worlds: Mulk, Jabarut and Malakut in macro- and microcosm, letting us talk about their likeness. Mulk in macrocosm is a realm of sensory perception, the revealed, the corporeal; Malakut is on the contrary – the realm of sensory imperceptible, unrevealed, and spiritual; Jabarut is the realm linking Mulk and Malakut, the realm of the Names of God. Mulk in microcosm is the human body: the flesh, bones, blood, etc.; Malakut is the mind and attributes of human being: life, knowledge, will, etc.; Jabarut is the sensory perception: seeing, hearing, touching, etc., all that ties the inner and the outer together. The Sufies of the Ibn “Arabī school of thought (Wahdat al-Wujud) name Malakut as the second world and Jabarut as the third. They add a fourth world, a higher one — Lahut, the realm of divinity, being also the deepest foundation of mankind.

The types of writing

There are many types of calligraphic writing, apart from six styles originated with the emergence of calligraphy and Iranian italic writing. Some of those types failed to be distributed widely; others gained very specialized fields of use. For instance, the diwani script was used only for writing official documents — in “Divân-ı Hümâyun”, and the “siakat” style was used for writing financial documents. Easy to master “Riq’ah” style was used in everyday writing and became a calligraphic script in the 19th century. “Riq’ah” style should not be confused with the “Riqaa” style, which is one of the six types of calligraphic writing.

The basic means of writing calligraphy is the pen which was primarily made of cane. The end of a cane sprout was sharpened with a special knife until it had the necessary thickness according to the size of the script. For writing of “Jelih” texts special wooden pens were used. For the smallest and finest scripts writers used pens with metallic ends. Calligraphic ink was also made according to a special recipe. The oily soot is mixed with some additives and the result is particularly greasy ink that is easy to write with on paper and to remove if any mistakes are made. The paper was also special: for the ink not to spill and the text to be easily written a special smooth paper was used.

For centuries the art of calligraphy was transferred from master to apprentice. Anyone wishing to learn this art had to do it from masters. The basic lessons are called “meshq” and are used for exercise. First pupils learn how to write each letter individually, and then they master the merging and connection of letters in syllables and words. Generally, after five years of study the candidate had to pass a sort of examination before three masters. If the examiners were satisfied with his calligraphy, they put their signatures under his work and this exam paper became a sort of diploma or certificate allowing the individual to practice this art. 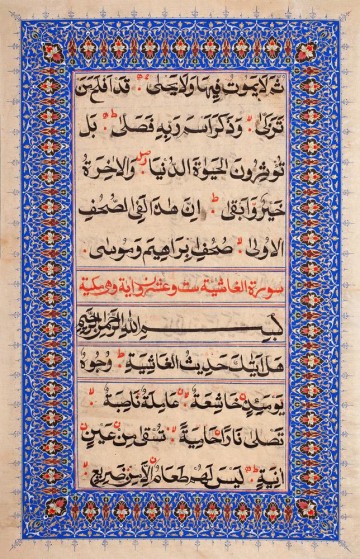 Excerpt from the Quran 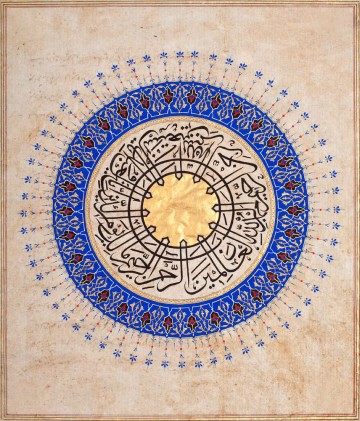 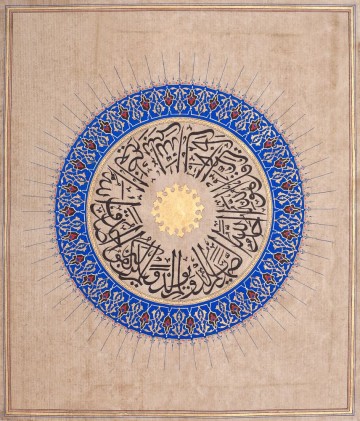