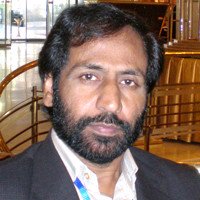 The art of calligraphy means beautiful writing. In Arabic script writing, a sense of spirituality is involved in the process as the lines are adopted from the Holy Quran. But it was much before the advent of Islam, that the art of calligraphy was practiced in China and later in Japan. It can be rightly called an art of the East. It reached its highest point of development in China, Japan and the Muslim world, where little distinction was made between painting and handwriting. In ancient China, calligraphy was as highly rated as painting.

In the Muslim world, the art of calligraphy was considered sacred because it was mainly attained and developed for writing the Holy Quran. Some of the Quranic pieces are highly decorative and calligraphy has been done with gold and silver.

The history of Muslim calligraphy will be incomplete without mentioning Ibn-e-Muqla who revolutionized calligraphy and eclipsed the supremacy of the only script, Koofic. As against the old traditions, he introduced a new system of calligraphy which for centuries remained as the only art among the Muslim fine arts. He introduced six styles of calligraphy and formulated its rules and regulations. This genius of the time was an avid reader of all kinds of Islamic philosophies. He was a man of letters with highly developed taste for literature, especially poetry. By the way, he was appointed Prime Minister thrice by the Emperors of the time.

Though the sub-continent had its own manuscript, it was with the arrival of the early Muslims for purposes of having trade or acquiring territory that Arabic script was introduced in the sub-continent. It was at the end of the first and beginning of the second century that Arabic script had been fully introduced here. By then mosques were being decorated with calligraphy.

It was with the arrival of the Mughal Emperor Babar, that calligraphy became art in the sub-continent. Few have given credence to Babar’s love of learning and his consuming interest in calligraphy. Whenever he could find time he would write tablets with calligraphic experiments and try to devise his own alphabets. He did devise one and also invented a style known after him a Khat-e-Babri. Even during the battles, Babar would always be accompanied by a calligrapher, who would record the eyewitness account of the events as Babar dictated. Babar’s “Tuzk-e-Babri” is a book of style and even today is read with great interest. During this period “Naskh” and “Nastaaliq” scripts had been introduced in India by the calligraphers who had accompanied Babar and Hamayun. The Mughal rulers had also brought paper to India because the native rulers of this area used only skins, parchment and the bark of Bhoj Patr tree. The Mughal rulers also introduced the tradition of decorating the buildings made under their patronage with beautiful calligraphic designs of Quranic Verses. The Mughal rulers did much to promote and encourage calligraphy.

At the time of the creation of Pakistan, the art of calligraphy like other arts also faced hard times. But the newspaper industry in the newly born country proved to be a cradle of survival for the art and there emerged a large number of calligraphers such a Taj-ud-din Zareen Raqm, Hafiz Yousaf Sadeedi, Yousaf Dehlvi, Abdul Majeed, Syed Imtiaz Ali, Muhammad Shafeef, Muhammad Iqbal Ibn-e-Parveen Raqm, S. Anwar Hussain Nafees Raqm, Soofi Khursheed Alam Khursheed Raqm, Makhdoom Muhammad Hussain etc. Through their efforts, the art of calligraphy regained the heights it had lost. But unfortunately after the expiry of these calligraphers, this art went astray. With advance technology and computer composing, the future of traditional calligraphy became obscure once again; but soon a new trend of calligraphic painting developed and evolved simultaneously.

Fortunately since a few years ago, calligraphy again came up and produced great artists whose works reveal their dedication, effort and love for this art. A large number of calligraphers are now creating their works.

Sequential national and international exhibitions are taking place throughout the country, art lovers and concerned viewers would see the works. Pakistani artists are well-known all around the world now. Appearance of numerous art galleries in every corner of the country displaying the calligraphy works of these artists verifies energetic existence, promotion and development of this art now. Considerable artists from all over the world come to Pakistan for exhibitions, seminars, workshops etc. as well as Pakistani artists participate in international exhibitions, seminars and workshops.

Surah In the name of Allah... 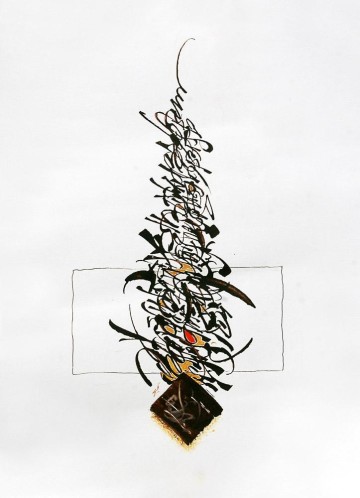 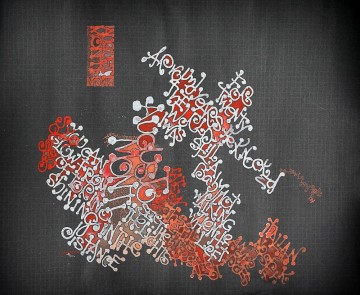 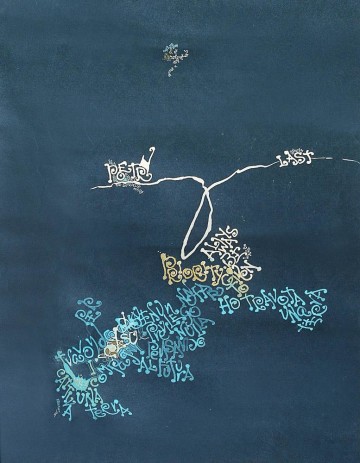 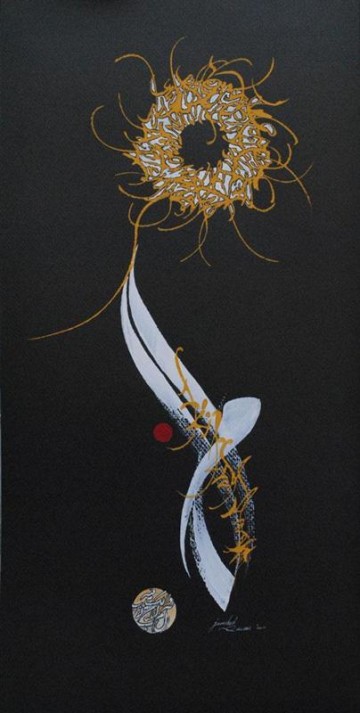