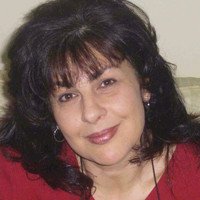 "I live in Victoria, British Columbia, Canada and am a member of the Fairbank Calligraphy Society, established in 1976. I was introduced to calligraphy as a student in high school. Michael Hemming, my art teacher and founding member of our guild, showed me the beauty of this craft. He had been instructed by a student of Edward Johnston, the great scribe whose contribution to the calligraphy revival in the early 20th century was immense. It flatters me to be a small part of this tradition".

"My family in Greece has strong roots in the art world, and that allowed me to become so intimate with the realm of the beautiful. My uncle, Spiros Papaloukas, has been influencing and inspiring me for a long time now; he and a few other artists spent almost a year on Mount Athos, studying and copying richly decorated Byzantine manuscripts, icons, and picturesque paintings. These exercises led to the emergence of a unique contemporary artistic movement, leaving vivid cultural heritage, a bridge between our civilizations, and I am keen to become his worthy successor".

"I studied Art History first in Greece and then at the University of Victoria. As long as I enjoy research, describing the evolution of scripts and historical manuscripts, my creative impulse will remain strong. I never left calligraphy, but now that my children have grown up and everything seems to have settled, I have more time to spend on things I like".

"Since returning to the craft in 2005, most of my work has been in English, but I have also started to explore Greek. Unfortunately, there is no living tradition of Greek calligraphy that I know of, so this is a somewhat lonely, though satisfying endeavor. I hope that learning from historical examples — classical and Byzantine — will engender complex research on the origins and heritage of our unique cultural identity. I strive to ponder every letter and image I create — so that the beauty of language can be transparent. Thus I can inject some diversity into impersonal, mechanical forms of communication, typical of the modern world".

"Meanwhile, I am learning as much as I can, especially about traditional tools and materials — parchment, papyrus, quills and reeds; traditional methods of gilding and illumination. Some visiting masters share their knowledge on working with gold and parchment with me, so I feel obliged to make good use of it. In the process, I’ve started not only to favour these materials, but to have a deeper understanding and appreciation of the tradition from which we’ve sprung. I feel privileged to have the support and encouragement from so many calligraphers in our Society – and of scribes from other countries. Studying with Yves Leterme at Island Magic this summer was something of a revelation, as well as working with such eminent calligraphers as Denis Brown, Martin Jackson and Peter Thornton".

“I am currently working on ten large calligraphy panels (6,7x9,15 m) dedicated to Hellenic Legacy; these will belong to our Greek community, but might be exhibited at schools and libraries. I also teach calligraphy, study William Morris’s life and work, and design business cards for my friend - artist and typographer - Alex Lavdovsky”. 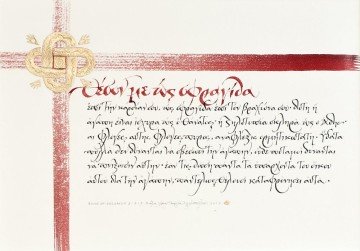 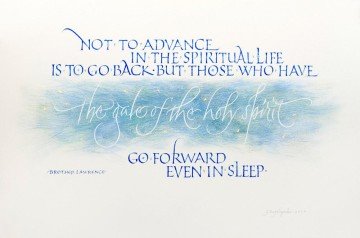 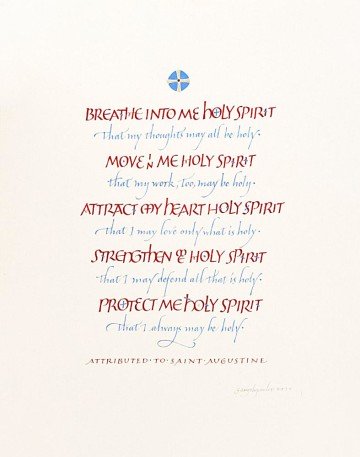 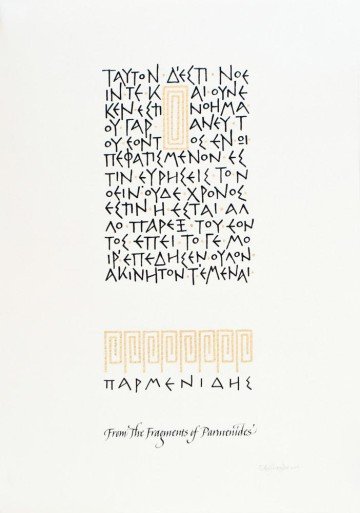