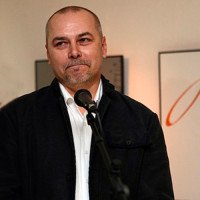 Calligraphy is not Just the Beautiful Tracking of Letters

Calligraphy is not only the beautiful tracking of letters, and one should not forget that. It is undisputable that this art develops movements, rhythm and also coordination of small muscular fibers of hands. It is very important. The more hands are at work performing the minutest operations, the more the brain is working. That’s why the need for calligraphy is very high. This is the art that can reflect different trends of time fully.

Calligraphy continued to exist centuries later. Wars and territorial divisions occurred; whole nations perished and disappeared from the planet, but the only thing, writing, remained unchanged.

At present, the value of hand-writing is lost and becomes secondary or may be third-rate. It’s regretful. One can discuss that for a long time, but something should be done about that.

To begin with, let’s draw your attention to the fact that our original writing, Cyrillic, is forgotten to a greater extent than, for instance, oriental writing. It’s not correct. If we look to the East, we will see that whole families are designated by the most beautiful hieroglyphs. It’s the face of the family. It is not difficult for us to imagine what place calligraphy occupies in the life in the East.

Someone can say that our culture exists under other laws and has other roots, and he will be right. However, one should remember that our writing (uncial, semi-uncial, Cyrillic) also represents rather ancient forms of writing. I will not touch upon the history of each of these directions, but one thing is for sure — it will be very useful if we learn to take positive past experience and apply the same in modern life.

If everybody is taught correct writing from childhood, if it is done in detail and correctly, one can say for sure that the basis of the future generation will be, at least, spiritually sound. Engraining calligraphy from childhood does not mean that all of us will be calligraphers; however, a good base will be laid down. It cannot be ignored.

We become witnesses of and participants in the period of superficial knowledge when the value of culture of any particular business is lost. An artist was a type designer, a graphic, a calligrapher. All of these elements were mandatory for a person to regard oneself an artist proudly.

But things do not stand badly now. I would like to note that, for instance, in Lithuania calligraphy is in fashion. And it is important here not only to communicate that such art exists but to start to actively show the fruit, the results of life of a human being actively involved in the calligraphy study process.

Calligraphy exists now. Moreover, it can be differentiated into folk, professional and amateurish calligraphy. It is enough to think that, despite even an absolute lack of attention to this art, it still lives and develops. Even though it happens slowly, it happens.

Nobody will argue that one handwriting differs from another (e.g. eastern and western calligraphy). It is logical and true; but why then writing in one countries develops and is cultivated, and in others, fades away and is forgotten? It is not fair.

Calligraphy will bring enormous fruit to the community. One need not forget that writing personifies the “interdependence” between the brain and a hand. Perhaps, it is not quite correct in terms of science; however, I would like to tell you that, when a person is writing, he/she is expressing his/her inner world; at the same time, while drawing beautiful letters, he shapes and decorates himself. Thus we get this interdependence. On the one hand, writing reflects brain processes; on the other hand, it shapes them.

Calligraphy is an individual sign that cannot be counterfeited. Counterfeit is immediately seen in this art. How can one and the same letter be drawn twice? There is no way to do so, according to calligraphy laws.

Being engaged in this art and developing a culture person in yourself, you make yourself more perfect, you refine your inner world. Calligraphy should live and develop.

Life. After the book "EGOisms"

Measure. After the book “EGOisms"

Love. After the book “EGOisms" 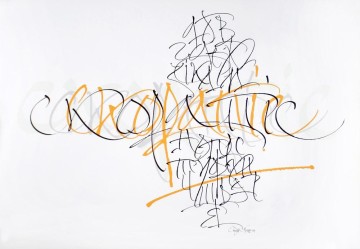 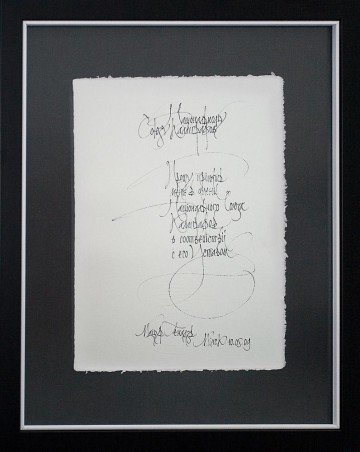 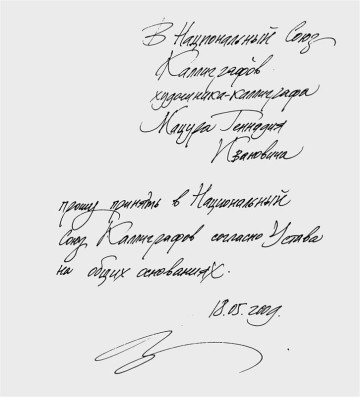 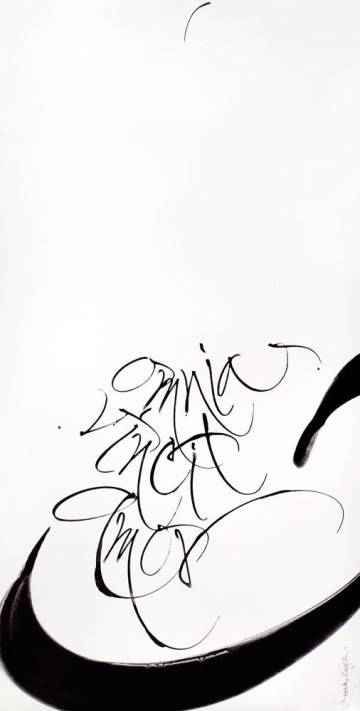