Get in touch with the history of automobiles and motorcycles

The Retro-Garage of Alexander Cherepanov is one of the most popular Perm museums among locals and tourists alike. The working group of the Association of Private Museum, headed by Alexey Shaburov, couldn’t miss it during the business trip to the Perm region.

The owner and founder of the museum has been fond of cars and mechanics since he was a boy. For some time, he was involved in motorsport, and when his sports career came to an end, he decided to build a Moskvich-412.

The 6th of November, 2012 can be considered the foundation day of the museum, but, over the years, there have been some challenging times for Retro-Garage due to the high prices on rental space for retro cars. In 2013, Alexander even asked the governor for help with finding the space for the museum, but he didn’t get any support, so he opened the exhibition on his own, following the European model.

To date, the Retro-Garage is the only museum of historic cars in the Perm Region. The core of the exhibition is based on private collections. It is worth emphasizing that all cars and motorcycles are in good condition. For example, the Moskvich IZh-Rally is the car Alexander drove in 2013-2015 at the Moscow Rally Masters Show and the Peking to Paris Motor Challenge of 2016. Some of the most interesting exhibits include the legendary vehicles of the 1930s-1980s: luxury ZiMs and Chaika’s, the vintage Emka, and the 1958 GAZ M-20 — Pobeda, Zaporozhets, famous Moskvich cars, models 401 to 2140, the 1975 Skif trailer tent, the Volga GAZ-21 that appeared on the screen in the movie Two Banks, the 1967 Volga GAZ-21 with its original sea-green paint, the 555-liter samovar-motorcycle featured in the Russian Book of Records, and many other vehicles. Guided tours to the Retro-Garage for children are extremely popular in the Perm region.

Alexander Cherepanov and his allies did an immense amount of work and established an expert board that allowed them to receive a presidential grant for the museum’s maintenance and development. Current partners of the museum are OJSC Russian Railways and the Perm Gunpowder Factory.

In addition to exhibition activities, the museum is engaged in scientific research. One of the research areas is mining civilization, with more than 200 factories in a closed ecosystem. The other plans include the foundation of the corporate museums union. 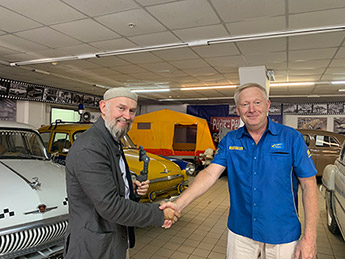 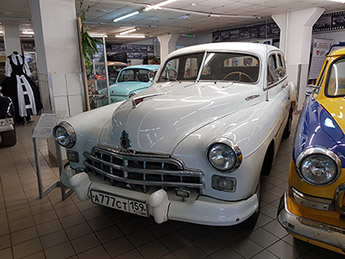