On March 14 the State Museum of Oriental Art opened the exhibition named Tughra – the Crimean Symbol of Russian Nationality, which marks the now celebrated 5th anniversary of Crimea reunion as a part of Russia.

On March 16, 2014, Crimea and Sevastopol held a referendum, which resulted in the peninsula reuniting with Russia. The intergovernmental agreement to accept the Republic of Crimea as a part of the Russian Federation was signed on March 18.

Alexey Kharyutkin, Deputy Director of the Contemporary Museum of Calligraphy, and Elizaveta Zherebtsova, Assistant Director, were invited to the opening ceremony, where they took a tour of the exhibit, spoke to the exhibition supervisor and congratulated the museum's management upon the opening of the event, expressing the hope of further cooperation.

Tughra is a calligraphic monogram signature of an Ottoman sultan or a Crimean khan – a few phrases in Arabic giving a clear measure for the ruler of the corresponding region. The sign has ancient origins and is associated with the ownership mark – the Seljuks family seal, when the rim land of the Ottoman world, the Crimean khanate, first saw the tughra in the 16th century.

The exhibit features tughras of Crimean khans dating back to the 16th-18th centuries, and Russian tzars and emperors of the 17th-19th centuries, including Mikhail and Alexey Romanov, Peter the Great and Alexander I. 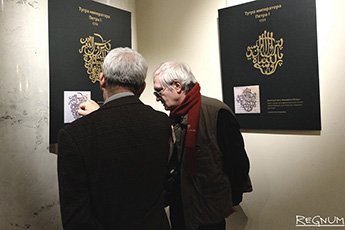 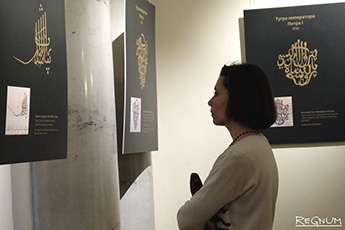 Exhibition opens in State Museum of Oriental Art, marks beginning of Crimean spring
Back to list