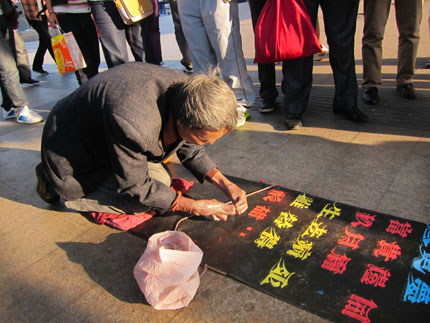 Cui Xianren, a street calligrapher, uses his damaged hands to write Chinese characters with auspicious meanings in chalks in a style he designed. Cui’s calligraphy has won wide attention online and a deal with domestic IT giant Founder, which has decided to add a font based on his characters to its database.

A Chinese calligraphy artist whose work was previously relegated to the streets will have a typeface named after him after a font developer discovered his talent through a popular microblogging website. For nearly a decade, Cui Xianren eked out a living by showcasing his calligraphy on the streets, writing traditional characters on a board with crippled hands.

However, on Tuesday he hopped on a train bound for the southern city of Shenzhen to meet representatives from Founder Type, a font developer that has promised to create a new font based on Cui’s calligraphy, as well as give him profits from the sale of the font for the next 50 years.

Founder Type discovered Cui via Sina Weibo, a popular Chinese microblogging site, according to Wang Haichao, manager of the company’s product department. An Internet user posted photos of Cui’s work on Weibo, resulting in an outpouring of praise and thousands of reposts.

«Cui’s upright and fashionable calligraphy has great commercial potential. We really admire his handwriting, as well as his perseverance,» Wang said.

Cui said he had no idea what Weibo was, but that he feels grateful for the help he has received from the site’s users. He said he initially refused to sign a deal with Founder Type, as he feared that his work would not be commercially viable.

«I was worried that Founder Type could spend its money in vain at that time. Now I think the offer will change my life and bring new hope to me,» Cui said.

Cui’s life took a tragic turn in 1993, when his truck exploded and burned both of his hands, leaving him unable to do manual work. Cui said he then decided to practice calligraphy to ease his mind.

«My injured hands could only use chalk. But I just practiced calligraphy and added some lines to the characters from my imagination,» Cui said.

Cui continued to work on his unique style of calligraphy at his home in the city of Suihua in Heilongjiang province until 2003, when a neighbor suggested that he could earn extra money by demonstrating his talent on the streets of China’s larger cities. Cui then decided to take his work to cities around the country.