On January 15, 2019, Sokolniki Exhibition and Convention Center and the Contemporary Museum of Calligraphy received calligrapher Wang Xiuling from Tianjin city. Her teacher was renowned artist Wang Xuezhong, one of those who learned their art from Xu Beihong, a famous Chinese painter and graphic artist.

Ms Wang showed a piece that had taken her three years to complete and for which a special painting technique was used, in which varying shades of color are achieved by mixing ink with water. The work was later signed by the wife of Xu Beihong and one of his students. A couple of famous Russian artists also wrote their signatures on the work at different times.

Ms Wang was happy to accept the invitation of the director of the Contemporary Museum of Calligraphy, Alexey Shaburov, to display her work at the museum. She will also send a piece she created to commemorate the 60th anniversary of the establishment of diplomatic relations between China and Russia and will work on another piece for the Great Chinese Calligraphy and Painting exhibition, which will mark the 70th anniversary of diplomatic relations between our two countries.

Ms Wang works to promote cultural exchanges between our nations. She was motivated to pursue this goal after a successful display of works by Russian and Chinese masters held in 2006. Two years later, the Tianjin Chinese Russian Center for Culture and Art was opened, of which Ms Wang was director for several years.

Wang Xiuling’s works can be found in the State Museum of Oriental Art in Moscow, the Russian-Chinese Friendship Society, museums worldwide, and the collections of Russian President Vladimir Putin and Prime Minister Dmitry Medvedev. 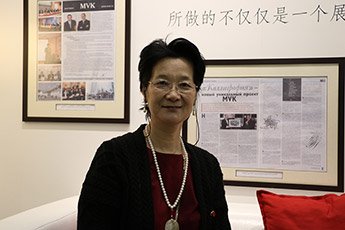 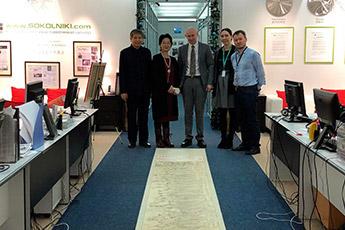