Between 22 and 29 May, poet, calligrapher, painter, master of Chinese stamps and porcelain, and children's art teacher, Mr Hua Kui enjoyed a breif but fruitful artistic trip in Russia, organized in collaboration with the DHH law group and its head Mr. Luan Shaohu. 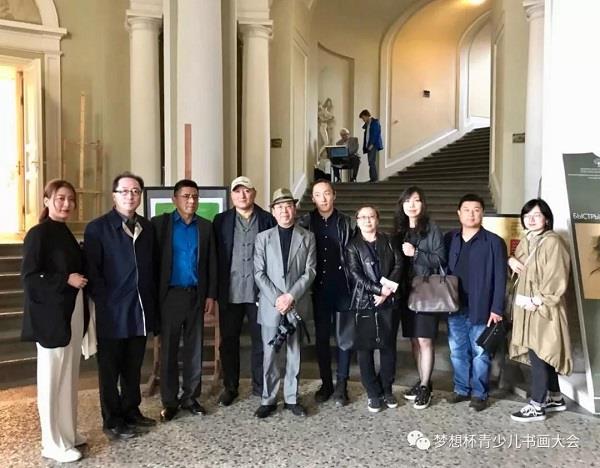 On May 23rd Mr Hua Kui received an invitation to visit St. Petersburg’s Repin State Academic Institute of Painting, Sculpture and Architecture of the Russian Academy of Arts

Hua Kui is a world-renown Chinese calligrapher and artist. His works have a unique style, rich content and diverse form. The artist not only has mastered the skills of traditional painting, but also has a deep understanding of the era. Moreover, his artistic style is ahead of its time. His works are highly valued and loved by eminent individuals from various backgrounds in China and abroad.

The DHH Law group has already been in existence for 30 years. The firm has major law offices in Beijing, Shanghai, Qingdao and other Chinese cities. Abroad, the company provides its services primarily to enterprises participating in the initiative “One belt, one road” using foreign capital. The company has large teams of legal experts, and has offices in Saint-Petersburg and Moscow. 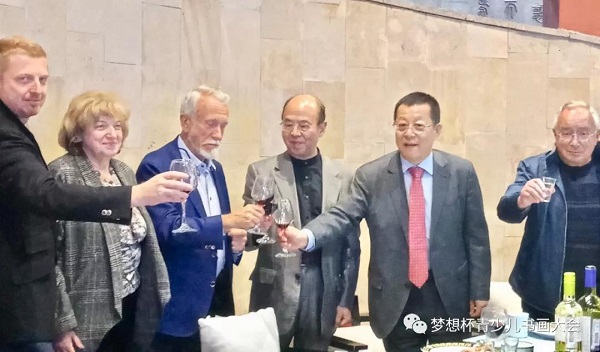 On the evening of May 24 at the welcoming banquet, Russian and Chinese guests repeatedly raised their glasses to mark the success of the exhibition

Hua Kui flew out of Beijing in the afternoon of May 22 and landed in the second largest city in Russia and the historical center of northern European art, St. Petersburg, accompanied by the director of the Beijing branch of the DHH legal group, Mr. Du Binh.

On the morning of May 23 the artist completed the arrangement of the exhibits. In the afternoon, accompanied the Deputy Chairman of the Union of Chinese Citizens in Russia, calligrapher Lo Lei and his wife, as well as employees of DHH law group, Hua Kui visited St. Petersburg’s Repin State Academic Institute of Painting, Sculpture and Architecture of the Russian Academy of Arts. The painter was amazed at the depth of art education in the Art and Artistic Analysis Department. 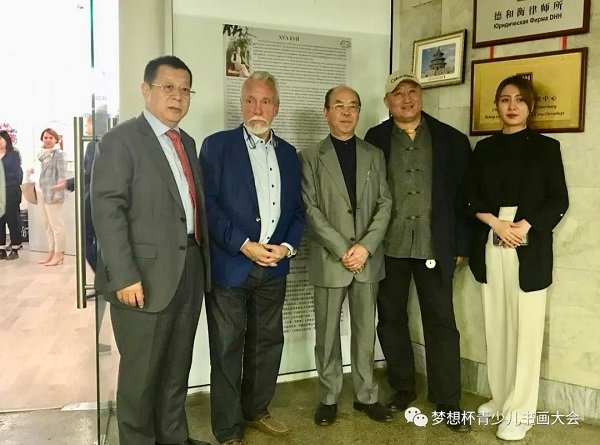 At the opening ceremony of Hua Kui’s exhibition of calligraphy and painting of Hua Kui in Saint- Petersburg, Mr Kui, Chairman Luan Shaohu, director of the Russian museum Vladimir Gusev and Lo Lei took a joint photo to remember.

On afternoon of May 24th, the grand opening of Mr. Hua Kui’s exhibition “Flowers of Hua Kui- flowers of the world” was held at the Russian-Chinese business-park in Saint-Petersburg at the office of Beijing DHH law group. The opening had many notable guests, including the director of the Russian Museum, Professor at St. Petersburg’s Repin State Academic Institute of Painting, Sculpture and Architecture, Head of the Saint- Petersburg Association of Chinese Calligraphy, vice-president of the Russian Association of Engravers, Head of the Law Firm “Baltic Sea”, Chairman of the Russian-Chinese business-park, Head and Deputy Head of DHH law group and other leading individuals of the art world and legal circles, who also extended their congratulations to the artist. Mr Hua Kui’s outstanding achievements in various types of art were highly appreciated by the guests. The greatest success of the exhibition lies in the fact that the director of Russian Museum, collector and an art connoisseur Vladimir Gusev commended master’s works and officially invited him to organize a large-scale personal exhibition of the works in the Russian Museum in September of this year. He also confirmed that a museum unit (online and offline) will be created in order to manage the project in China (including Hong Kong, Macao and Taiwan), and to transfer full legal support to the Hong Kong Branch of the DHH legal group. 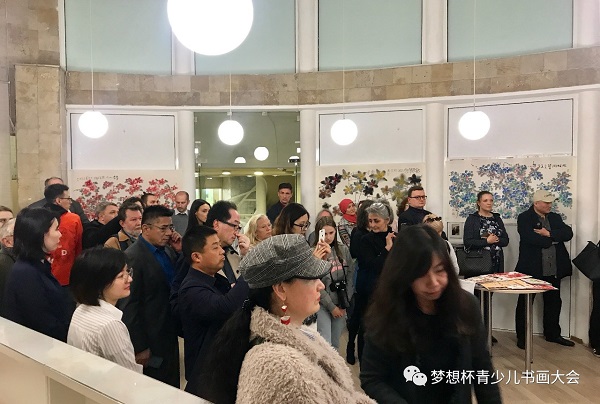 On the afternoon of May 24, the opening ceremony of the exhibition “Flowers of Hua Kui- flowers of the world” was held at the Russian-Chinese business-park in Saint-Petersburg

On May 25th, Hua Kui and his Russian and Chinese friends visited the Russian Museum, the Winter Palace, Peter and Paul Fortress and other sights. Hua Kui became fascinated by the monumentality and brilliance of Russian culture, art and history. On the morning of May 26th, Hua Kui got on a train in Saint-Petersburg and by the afternoon he was already in the political and economic center of Russia - Moscow. Mr Hua Kui and the Head of the law firm, Mr. Luan Shaouhu and his deputy Xi Bo were invited to spend the weekend at the country house of a banker, enjoy a barbecue and watch the sunset. 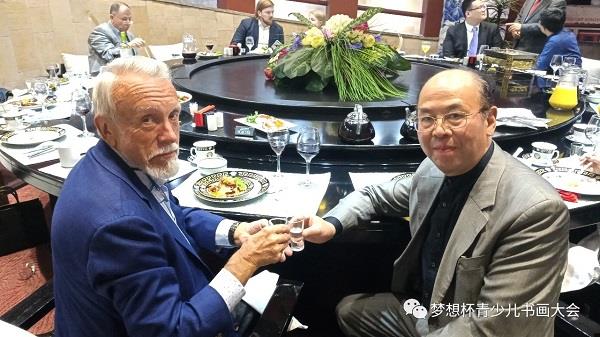 On the morning of May 27th, the artist prepared for the exhibition, and in the afternoon, together with Mr Du Bin, the director of the Beijing branch of DHH legal group, visited the Contemporary Museum of Calligraphy, and were warmly received by the director of museum, Alexey Shaburov. Hua Kui wrote a calligraphic work “A heart heard a beautiful scent” and donated it to the Contemporary Museum of Calligraphy. Prior to this, Mr Shaburov came to Beijing twice and visited Mr Hua Kui’s home. Mr Shaburov and Hua Kui have built a very strong friendship to strengthen the exchange of calligraphic art between the two countries. 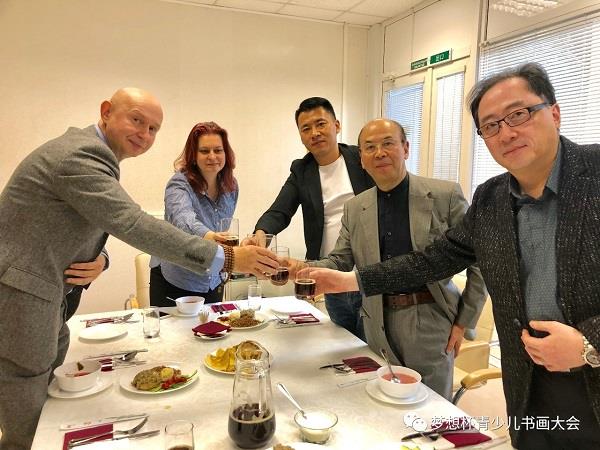 On the afternoon of May 27, the third Moscow office of the Beijing branch of the DHH legal group hosted the grand opening of a joint exhibition of Hua Kui's artwork “Happy Flowers, Flowers of Hua Kui ” and the exhibition “The Art of Ceramics Photography” by the head of the China School of Art Photography Yang Yuanxing. The authors of the works held a joint exhibition abroad for the first time. Although the exhibition was small, the guests praised the virtuosity of the masters. This traveling exhibition, which arrived to Saint Petersburg from Beijing, was organized by the Moscow Center of Legal Culture “Blue Ocean” of DHH legal group. Thanks to close contacts, a solid friendship was built between Mr Hua Kui and Chairman Luan Shaohu, based on a deeper understanding of each other, and gives direction for the future all-round cooperation. Both sides decided to make full use the resource advantages the legal group has in China and abroad, and spread the art of Hua Kui both in Russia and the United States, as well as in countries participating in the initiative “one belt, one road”. In July, the Hua Kui Museum was opened in the company's Shanghai office, and similar museums will open later in other cities. 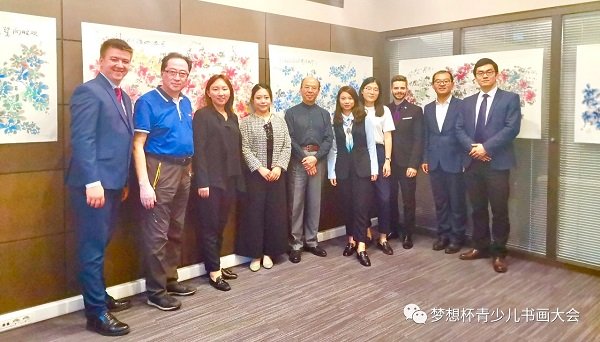 A joint photo of Mr Hua Kui and the employees of the Moscow office of DHH legal group taken on May 27th to remember the opening ceremony of the exhibit “Happy flowers, flowers of Hua Kui” 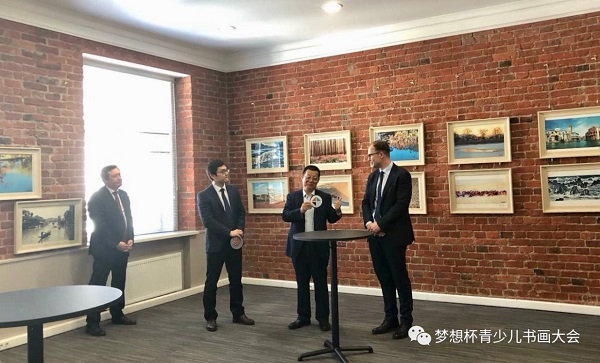 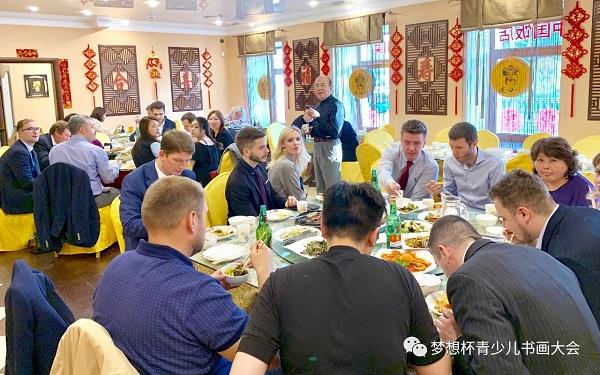 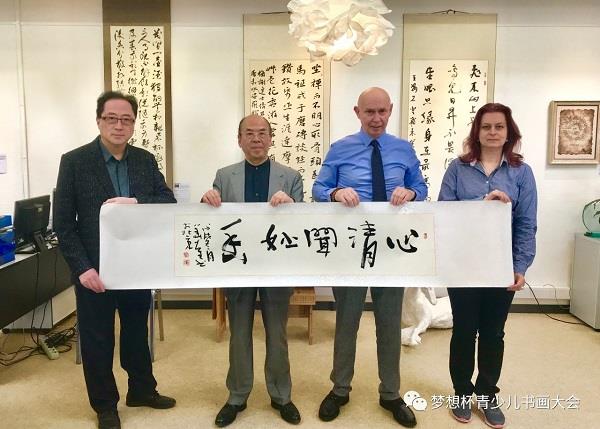 On the morning of May 27, Mr Hua Kui donated his artwork to the Contemporary Museum of Calligraphy

The afternoon event of May 28th is one of the key events of Hua Kui’s trip to Russia. Mr Kui, at the invitation of Chinese aritists, joined the exhibition “Great Russian and Chinese Calligraphy”. Chairman of DHH legal group was invited to attend the opening ceremony of the exhibition. The Chinese ambassador to Russia, Li Hui, high-ranking officials of the Russian State Duma, Russian and Chinese calligraphers, well-known public figures attended the opening ceremony. Approximately 100 guests were present at the event. 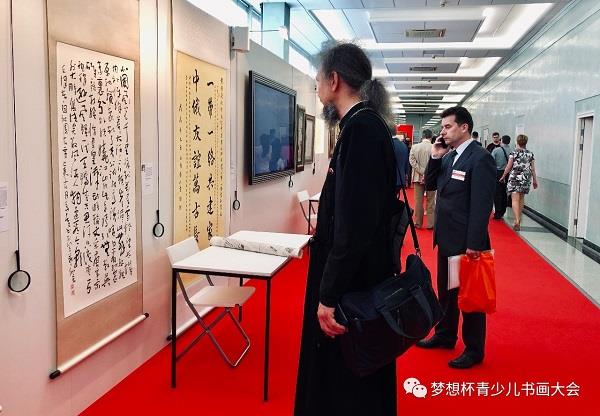 The opening ceremony was hosted by Mr Alexey Shaburov, the director of the Contemporary Museum of Calligraphy and the main organizer of the exhibition. In his speech, he stated that the standards and influence, demonstrated at the exhibition are unprecedented. As an exhibitor, Mr Hua Kui was chosen to create an artwork in the large character Bangshu style at the opening ceremony right in front of the audience. The work is called “Long’yin”, which means “roar of the dragon”. The painter donated this artwork to the Contemporary Museum of Calligraphy. He also gave an interview to the Russian journalists at the event. 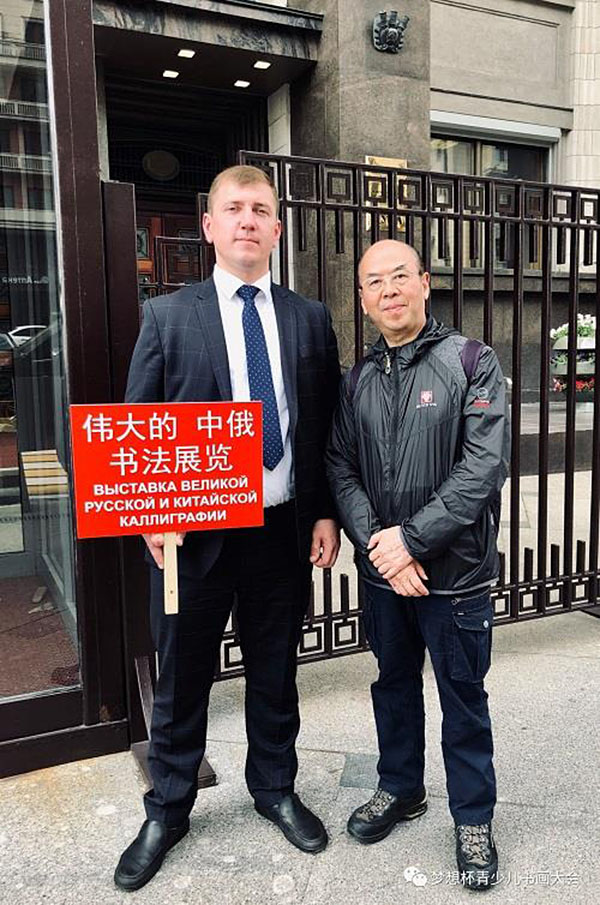 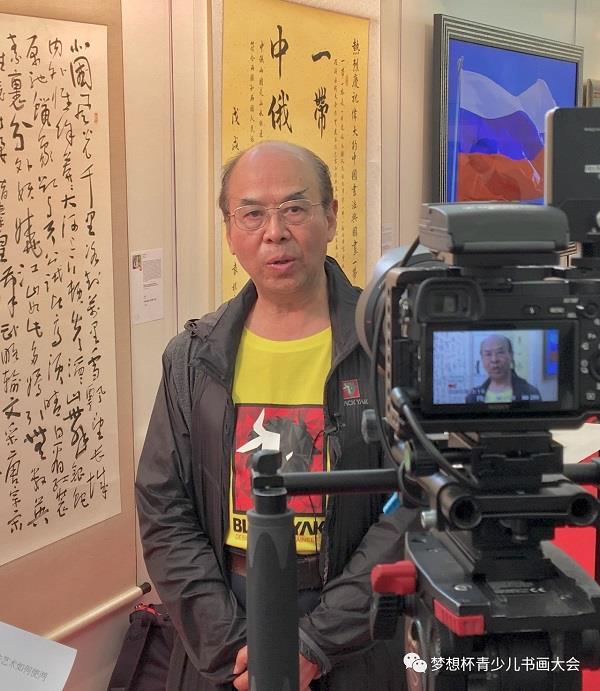 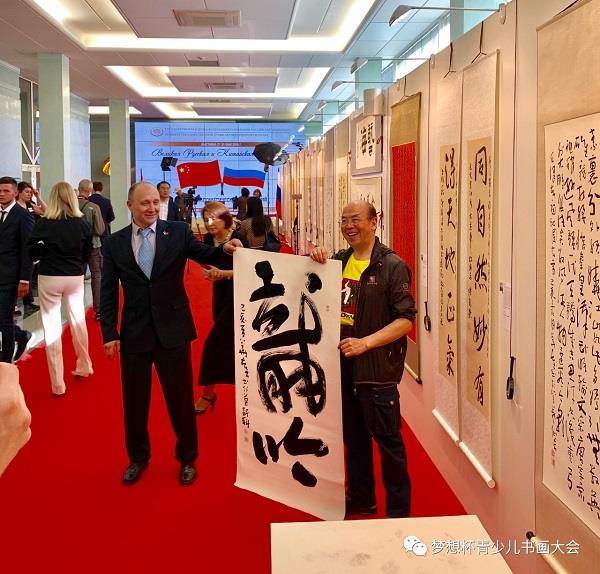 As an exhibitor, Mr Hua Kui was chosen to create an artwork in the large character Bangshu style “The roar of a dragon”, at the opening ceremony in front of the audience 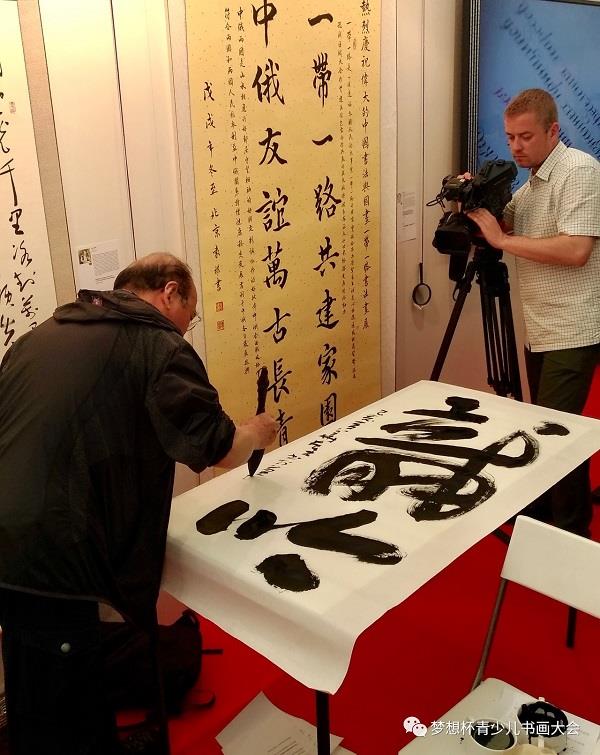 As an exhibitor, Mr Hua Kui was chosen to demonstrate the art of calligraphy at the event 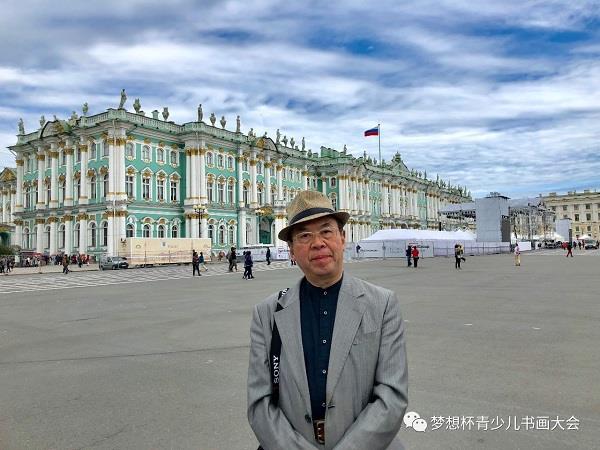 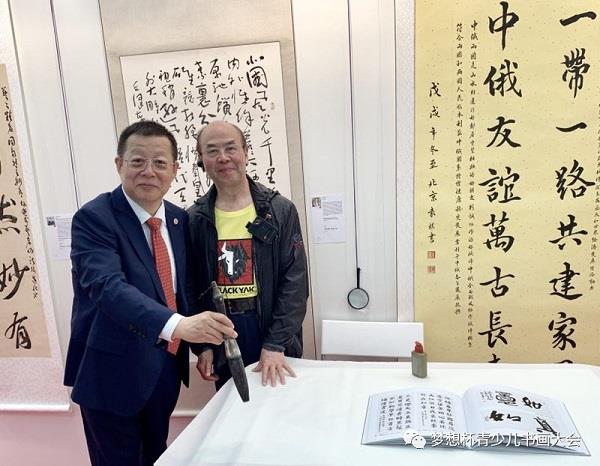 A photo of Mr Hua Kui and Chairman of the DHH legal group, Luan Shaohu, in front of the master’s work, on display at the “Great Russian and Chinese Calligraphy” exhibition 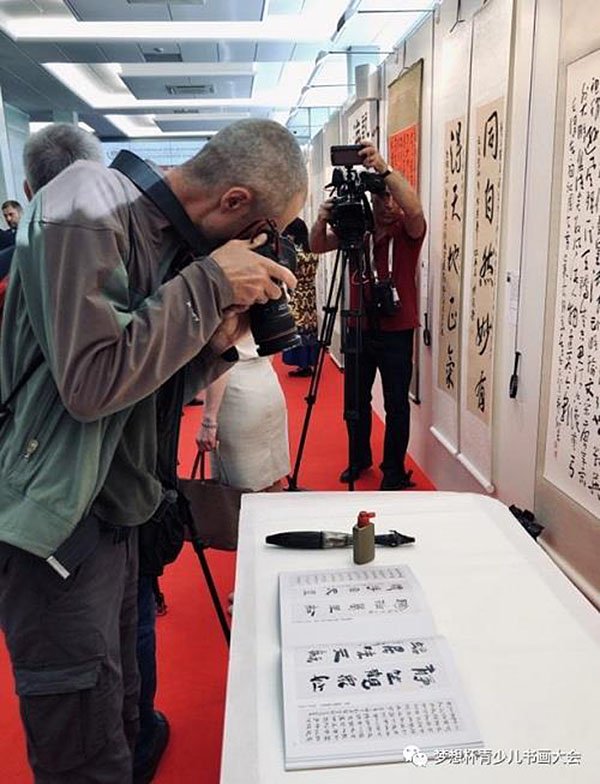 On the evening of May 28, Mr Hua Kui and Chairman Du Bin flew home from Moscow, and he landed in Beijing in the morning on May 29th. Hua Kui confirmed that his visit to Russia was very successful. 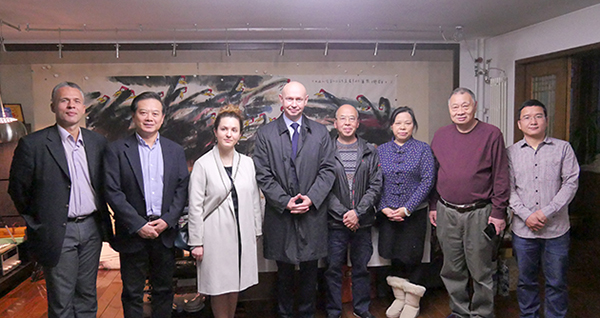 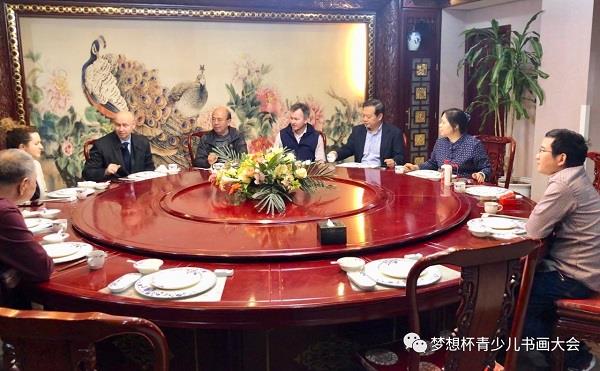 A welcome banquet in honor of Mr Shaburov’s visit, organized by Hua Kui