This year's "SAC Calligraphy Festival" began its 50-day exhibition on Saturday. It is the third installment of the annual calligraphy festival by Seoul Arts Center's Seoul Calligraphy Art Museum in southern Seoul.

The festival started in the autumn of 2017 and has focused on highlighting major works by representative calligraphy artists, as well as discovering artists of the new generation.

This year's festival aims to expand the realm of traditional Korean calligraphy through collaborations with other genres of the arts, such as media arts and graffiti, to attract new enthusiasts to a genre that could be perceived as somewhat archaic in this fast-paced digital era.

Known as "seoye" in Korean, Korean calligraphy is the nation's traditional artistic writing that dates back more than a thousand years. Korean calligraphy has encompassed both ancient Chinese characters, which were used over thousands of years on the Korean Peninsula, as well as "hangeul," the Korean alphabet proclaimed in the mid-15th century by King Sejong the Great, the fourth king of the Joseon Kingdom (1393-1910).

More than 90 works from 48 artists are displayed at the museum inside the Seoul Arts Center, ranging from traditional calligraphy to media arts.

"This exhibition well shows sincere efforts by calligraphy artists of the young generation to maintain the age-long traditions of calligraphy while embracing the future generations," Seoul Arts Center's CEO Yoo In-taek said. "Those who do not know much about calligraphy arts can easily enjoy the displayed works at the exhibition."

The exhibition has three main parts. The first focuses on calligraphy's changing styles, with 18 artists demonstrating and recreating some of the most well-known styles of calligraphy over its history.

The second part shows the collaborative works of calligraphers and media artists. The traditional beauty created mainly by writing with a brush and black ink has been transformed into 3D works of colorful lights filling an empty space. These works are only done in the Korean alphabet, lowering the bar for novices and expanding viewership for this art.

The final part of the festival shows more bold attempts, such as the merged work of calligraphy with graffiti. Organizers hope the art genre of traditional Korean calligraphy will be more experimental and take a freer form, expanding calligraphy's artistic boundaries. 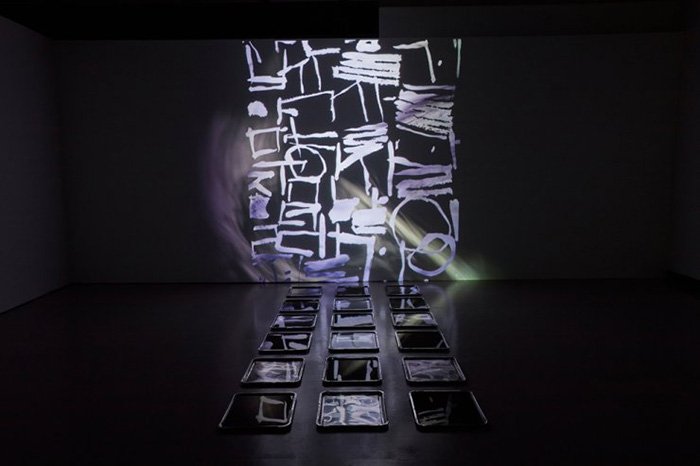