A calligraphy artist in North China, who says he never took a day off for eight years, has finally completed a 3-kilometer-long series of scrolls that have been declared the country's longest.

The calligraphy work by Yang Chunguang, who lives in the city of Xingtai, Hebei Province, was made in 108 rolls, each of which is 30 meters long, for a total length of more than 3,000 meters. "I wrote 1.13 million characters," said Yang, in a video posted by The Paper on Sunday.

Shanghai China Records Headquarters declared Friday the work to be China's longest ever.

Yang said that he has worked on the scrolls every day for eight years, even if it was to write only one or two characters in some days.

A local gallery put on a show of scrolls of the calligraphy which stretched across multiple rooms and detoured around corners. 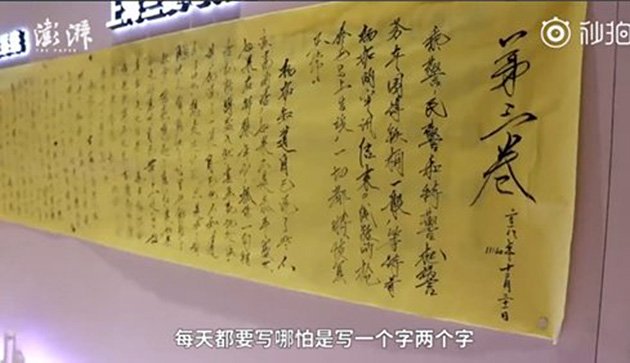