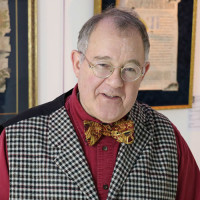 Born in 1949. A renowned IAMPETH Master Penman and Past President and an expert on penmanship, Michael Sull was Ronald Reagan's calligrapher after his Presidency and is known worldwide for his skill and teaching ability. He frequently presents workshops throughout North America and abroad. Author of textbooks on Spencerian Script and Ornamental Penmanship. He is considered America's foremost living Spencerian penman, director of educational programs of Ink Academy. His penmanship artwork can be found in numerous private collections. His publications are considered classic references and are used by students around the world. 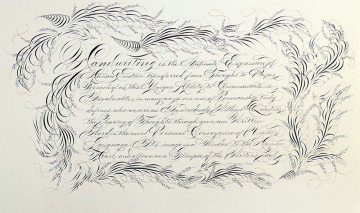 McCaffery’s Penman’s Black iron gall ink and Dr. Ph. Martin's Iridescent Calligraphy Inks, handmade cotton paper, handmade oblique penholder, 2018
Text:
“Handwriting is the Ultimate Expression of Human Emotion transferred from Thought to Paper. For each of us, the Unique Ability to Communicate is Invaluable, in many ways our use of Penmanship truly defines who we are as Individuals. Without Question, the Sharing of Thoughts through your own Written Word is the most Personal Conveyance of Visible Language. Its image is a Window to the Human Heart and allows us a Glimpse of the Writer’s Soul.”
Back to list