The Museum for calligraphy and small graphics in Pettenbach (Austria)

It is known far beyond the borders of Austria and in 2002 it could celebrate its tenth anniversary: The ”Schrift- und Heimatmuseum“ in Pettenbach, a small community in Upper Austria. What today seems to be the most natural fact of the world, its situation in a small country-village, has a long and very uncommon history.

Why is there no museum dedicated to calligraphy and small graphics, like exlibris, in Austria? This was the question graphic artist Leopold Feichtinger was concerned with after he had made sure that in his home country there was nothing comparable to such institutions in other countries. As he couldn't find any support in official places, he developed a plan to found a museum like that himself.

Leopold Feichtinger was born on October 31st 1919 in Pettenbach. In his early days he became a bricklayer. When he was in the navy during the second world-war he discovered his calligraphic abilities, but he could only follow this way when he was back home from being a prisoner of war. In the year 1947 he attended the ”Graphische Lehr- und Versuchsanstalt“ in Vienna as a guest student, 1948 he became private student of Prof. Friedrich Neugebauer in Bad Goisern.

After a bad accident during his work as a foreman bricklayer he had to change his profession. So from 1952 he worked as a technical draughtsman and 1958 he became an independent graphic artist. His artistic work contents a big number of exlibris and calligraphic worksheets as well as about 400 graffiti works. Leopold Feichtinger was a member of the ”Berufsvereinigung bildender Kunstler Osterreichs“. He won a number of artistic contests and in 1983 he was honoured with the ”Goldenen Verdienstzeichen der Republik Osterreich“. He died on December 31st 1993 in Pettenbach.

Concerning his idea of a museum of calligraphy Leopold Feichtinger had to plan and work on his own first. He had always been used only to rely on his own and to work hard. So he decided to place his own property at the communities disposal and to found a supporting society in order to give a legal basis to this museum. With all his personality he had to convince the local government and the inhabitants of Pettenbach of the idea of such an institution. Due to his popularity he succeeded in his municipality, but not at the Upper Austrian cultural authorities. An expert opinion requested from the artistic academy in Linz was disadvantageous for the project. But Leopold Feichtinger did not give in. He went on fighting for his idea and finally he got a second expert opinion, this time from the very well known Prof. Friedrich Neugebauer, who supported the foundation of a calligraphy museum. At last Feichtinger even went to the provincial government and succeeded: he was given support for his project.

After he had got the official support for his idea, Leopold Feichtinger and the members of the supporting society started to reconstruct a part of his house for the museum. Though Leopold Feichtinger gave most of his time for working on the project, he never would have been able to realize the museum without all the practical help he got from the inhabitants of Pettenbach. The local enterprises and businessmen supported him very generously, lots of friends and neighbours worked without any payment in order to help him realize his idea. So within a short time the reconstruction was finished and the modern and light rooms of the new museum waited for the first exhibition of calligraphic arts. For artistic consultions he could engage two acknowledged specialists: Prof. Friedrich Neugebauer, responsible for calligraphic arts and Dr. Ottmar Premstaller, president of the Austrian Society for exlibris, responsible for small graphics. Both helped him with the design of the exhibitions and provided him with contacts to acknowledged local and foreign artists.

On May 29th 1992 for Leopold Feichtinger a dream came true; a dream he had worked for very hard and he had dedicated a part of his health and his prosperity to: With an official ceremony the ”Schrift- and Heimatmuseum Bartlhaus“ was opened. Only for eighteen months he could take part in all the activities but his expectations came true: the supporting society has been able to manage it the way he would have done ever since. Since 1992 in Pettenbach there have been shown three exhibitions a year of the works of acknowledged calligraphic and exlibris artists from all over the world. The museum has become well known among calligraphic artists even in foreign countries. In the meantime the museum does not only own the whole work of Leopold Feichtinger, among it some handwritten books, but also numerous original calligraphic sheets and special prints of famous artists and a voluminous collection of exlibris. Since 2003 to a large extent the artistic work of Prof. Neugebauer (1911–2005) can be seen permanently in the museum.
A new section of the museum has been dedicated to printing, showing the history of printsetting from Gutenberg up to the computer with leaden letters, printing machines and tools. All these meanwhile historical possibilities to create a print can be watched here. There is another section of the museum which is dedicated to local history, crafts and traditions. A large amount of the exponats has been given to the museum by Leopold Feichtinger, too. Besides, the ”Bartlhaus“ is not only a museum, but a calligraphic workshop as well. During the summer, calligraphic courses take place in the museum, given by Mrs. Ingrid Litschauer who in the meantime has taken over the artistic consulting from Prof. Neugebauer. 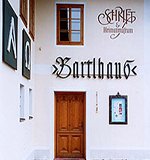 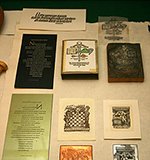 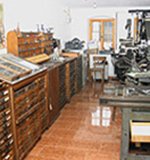