The most interesting facts…

Library is a collection of information, sources, resources, and services: it is organized for use and maintained by a public body, an institution, or a private individual. Libraries are integral parts of the country and nation, and indicate the human desire to preserve and collect knowledge, and progress both culturally and intellectually.

Nowadays there are different types of libraries: national, regional, public, specialized, and “academic” (university, institute and school libraries). In Russia we celebrate the so-called Day of Libraries on May 27 thus marking the foundation of the Russian National Library in 1795. the history of archives dates back to the ancient times.

The first libraries appeared in the Ancient East. The most well-known Ancient Eastern library is the Library of Ashurbanipal in Nineveh: it contained all cuneiform literature available by that time. The Library of Alexandria is the most famous antique library in the world. It was founded at the beginning of the Third century BC and was the centre of education and science. Over 1500 years ago it was destroyed. There are several versions of how it had happened. The most popular version claims it was burnt down after Alexandria had been captured by the Turk-Osmans. At the beginning of the 21st century the legendary book repository was restored with the collective attempts of different countries.

The most famous libraries in the world:

Nowadays it is the main Egyptian library, the cultural centre located on the seashore of the Mediterranean in the city of Alexandria. The library is the memorial of the Royal Library of Alexandria destroyed in Ancient times and the modern research and educational centre at the same time.

Library of the Academy of Science  (BAN) in St Petersburg

It was founded in 1714 by the order of Peter the Great. The library’s mission is to preserve historic documents especially valuable for the humankind and information support of the Russian science and technology.

Library of Ashurbanipal in Nineveh

The library of the last great Assyrian king known as the collector of ancient handwritten scripts. The library containing over 20, 000 cuneiform tables with historical, religious, magical and scientific texts was found during the archeological excavations in Nineveh in 1849-59.

The library was officially opened in 1803 by the Duke of Kent. At present time it is a modern library which contains over 35, 000 books including the rare samples.

The library located in Weimar is more famous as Goethe’s Library; in 1797-1832 the poet was its constant visitor. The library contains the richest collection of The Faust editions and musical manuscripts, handwritten books and ancient maps. During the fire of 2004 the library archives were severely damaged, however, now the library is completely renewed.

The library contains over 4 million books and manuscripts, 41, 000 on-line magazines and 500, 000 on-line books and several hundreds data bases. The archives of the library make it one of the best academic libraries of Great Britain.

Library of Congress, the USA

The National Library of the USA (Washington, DC) is one of the largest libraries in the world. It is the scientific library of the USA Congress and serves the state institutions, research and development labs, scientists and schools. 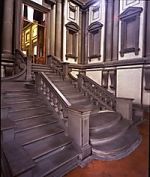 It is one of the largest Renaissance libraries, the repository of manuscripts and books of St Lorenz complex.  The library was designed by Michelangelo.

One of the oldest libraries in the world named after Sir Thomas Bodleian. It comprises the central Bodleian library and eight subsidiary libraries. The library collection is used by the scientists from all over the world. 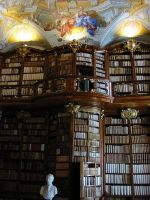 The library is located in the eastern side wing of St Florian Abbey. It had been built in 1744-1750 by G. Hayberger. The library ceiling is painted by Altomonte and the rococo gallery stretches along the walls. 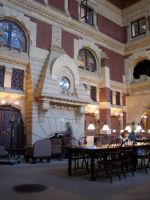 The Fisher Library is the main library of the Sydney University which contains the largest book repository in the southern Hemisphere. The number of books counts up to 2 million items. The modern library consists of the two joining buildings built during the University foundation.

The national library of great Britain. It is one of the largest libraries in the world. It contains over 150 million books. 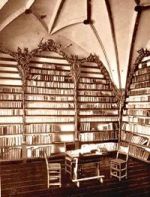 The book repository in Koenigsberg (modern Kaliningrad) of the 17th-20th centuries.  In the middle of the 19th century the library funds contained about 10, ooo books and manuscripts. It was destroyed during the Great Patriotic War (1941-1945).

It was founded in the 15th century by the Pope Nicholas V together with the St Laurents library. Later on it was extended especially during the Pius IV era.

Staatsbibliothek, the State Library in Berlin

It is the cultural heritage of Prussia. The library contains about 10 million books. Apart from its main function the library also makes the list of incunabula (books that were printed before the year 1501 in Europe) and provide literary and information support.  Though it has been 60 years since the end of  WW2 a part of the evacuated funds are still kept in the libraries of Eastern Europe and the librarians still try to unite them.

It is known as Albertina and is the national scientific library of Belgium. Its main mission is to collect and preserve all the editions issued in Belgium and works of the Belgians living somewhere abroad. It also contains a large number of foreign books.

The library was built in 1673 and is one of the largest libraries in Scandinavia. It includes 2,5 million books and original manuscripts of Hans Kristian Andersen. The library addition contains 200, 000 books, a book store, restaurant, six reading halls, assembly hall and 600 seats concert hall.

The Cambridge University Library was first mentioned in 1416. At present time the number of books counts to 7 million and includes Gutenberg Bible, Darvin’s letters, Isaac Newton’s notes ad archive of the Royal Observatory.

The library is situated in the eastern part of Minsk and is one of the largest in the world. Nowadays it comprises over 13 million multimedia units.

It is one of the largest and oldest libraries in the world. It was founded in 1480 as the Royal Library, and in 1795 was pronounced National. The library attendance is allowed to people with university diplomas or references from a research institute. Together with the Sorbonne library it catalogs French and foreign periodicals of the 45 largest university libraries of France.

It is one of the greatest libraries in the world, and is often referred to as the museum-library. At present time the library repository counts up to 43, 3 million scientific documents and 15, 5 million books. Apart from books it contains pictures, plates, engravings of famous and lesser-known artists granted together with books.

It was founded on the basis of Rumyantsev Museum and is one of the largest libraries worldwide. In 2008 the library will celebrate its 180th anniversary. The library contains 42million items.

The library has over 55 subsidiaries and contains 5, 1 million books. It was opened in March 1894 under the motto "the public library should be free for everyone".

Nowadays the libraries are still as valuable and important as they used to be. Many reading halls provide the on-line catalogue services.