Home  /  All about calligraphy  /  Graffiti  /  How to make graffiti 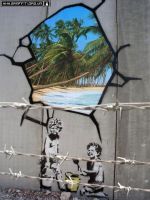 Culture of graffiti was born in USA on streets of Philadelphia as times passed it was spreading in New York. In 80-s of  XX century directors of art-galleries expressed deep interest in works of writers pointing out artistic and commercial potential of street artists.  The first question was how to exhibit their works. In order to put into practice some works must be copied on canvas otherwise it was impossible to transfer them for exhibitions abroad let alone selling.

The direct consequence of exhibitions organized in such galleries as FashionModa of Stefan Aines, FunGallery of Peti Astor, Gasgallery, 51x, SidneyJanis and ESSES studio was the chance for museums to “get acquainted” with street art as well as donation of considerable number of works to the museum collections. This mutual exchange has led to the peculiar dialogue traditional art and street-art thus new names appeared in artistic world Jean-Michel Baskia and Keith Haring. Soon more and more galleries concerned themselves with graffiti . Russia is not an exception : after Street-art event which took place in Russia in 2006 funds of Tretyakov gallery on Krymsky val recruited with a range of 10-meter canvas with works of Russian writers.

Besides, last year on  International Day of Museum when every museum tries to celebrate in the most unordinary way  Belgorod State Art Museum  did it in their own way  by holding graffiti contest.

The fact that spaces of factories as a rule are used for exhibiting writings is not quite adequate since graffiti put in the frames of picture lose monumental aesthetics and spontaneity. Street exhibitions are much more rare, except for Berlin fest Backjumps, which includes several forms of street-art and aimed at studying it in “natural” environment. And such a method of representation is the most effective one.

In conclusion, we can state that graffiti is evolving into one of avant-garde art styles. Today graffiti exhibitions are held not only in museums, albums with best graffiti works, books  are being issued. There is also popular edition Graffiti world, which discovers main periods and trends in the development of this art style.