Home  /  All about calligraphy  /  Graffiti  /  History of graffiti

As in usual art it has its own heroes- legends of graffiti, role models for many writers.
Nowadays everyone who heard a thing or two about graffiti knows such writers LOOMIT, DAIM, CAN2, COPE2 and others. More or less modern styles in graffiti are based on the ones created in past times.
The époque which became the starting point for graffiti development is called OLD SCHOOL: it lasted from 1966 to 1984.

In period from 1966 up to 1971 graffiti evolved into one form of political activity and was used to demarcate territories between street bands. At that time CORNBREAD and COOLEARL became down-to-earth: every wall in Philadelphia (Pennsylvania, USA) was signed with their tags. Then graffiti spread to NY but there’s no clear explanation how that happened.

First writers have appeared on the stage since 1971 till 1974, New-York Times devoted the whole article to one of them. His name was TAKI 183: working as a delivery guy he practiced graffiti in the underground, leaving his tags on walls and wagons. JULIO 204, FRANK 207 with JOE 136 were one of the first writers.

As time went by graffiti its scope rose and was spreading in one of the far-flung areas of NY in Brooklyn where renowned FRIENDLY FREDDIE created. All the writers were painting in the underground and step-by-step it evolved into the silence competition between areas: everybody wanted his work to be the best.  Usually these were tags and the aim of competition was not in writing but in bombing that is writing one’s tag as many times as possible. Gradually writers were concentrating on rail yards since there was less chance to be caught than in the sub and more time to finish one’s writing so the quality was rising too. That was the moment when the key principles of modern bombing were formed.

The number of writers increased and they needed to have something new to be noticed. It was the spirit of competition due to which new trends appeared in the art of graffiti. In order to make their tags the fanciest one writer began decorating them. Those who wanted to be known as kings garnished their tags with crowns. One of the most famous tags was STAY HIGH 149.

By and by writers started enlarging the scope of their tags, but writings painted with the standard mouthpiece of painting balloon were just a slightly different from the previous ones. That was the time when writers began using pieces from other sprays thus obtaining various thickness of lines and delineating letters in other colors. Due to the new method masterpieces (pieces) were created.  SUPER KOOL 223 from Bronx is said to be the first piece writer.

Bit by bit writers were enlarging their tags, experimenting with graffiti design limited only by the writer’s imagination. Sometimes writers painted their piece on the whole wagon (SUPER KOOL 223 is here the pioneer too). Those scripts are called Top to Bottom. Such writers as  HONDO 1, JAPAN 1, MOSES 147, SNAKE 131, LEE 163d, STAR 3, PHASE 2, PRO-SOUL, TRACY 168, LIL HAWK, BARBARA 62, EVA 62, CAY 161, JUNIOR 161 and  STAY HIGH 149 were extremely popular at that time.

Thanks to Hugo Martines and his organization «United Graffiti Artists» was held the exhibition of sub talented artists. Writings were performed in tradition of art gallery thus giving artists the chance to demonstrate their art. Gallery «Razor» opened by Hugo Martines in assistance with such famous writers as PHASE 2, MICO, COCO 144, PISTOL, FLINT 707, BAMA, SNAKE и STICH had a stunning success.

While first attempts to create narrative writings were made. In 1974 TRACY 168, CLIFF 159 with BLADE ONE tried to combine script with characters from various cartoons. In the end of that year first Whole cars (scripts of a wagon height) appeared –AJ 161 and SILVER TIPS became profs in this field. 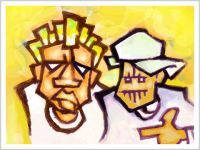 Period from 1975 to 1977 was mainly connected with bombing, often called “the greatest in history of graffiti”. To begin with it’s connected with the rising interest to this field, secondly at that, time subway was little financed and wagons weren’t almost cleaned up. Then a variety of graffiti styles, whole cars became some kind of warm up for writers. Throw up style takes its root from that time. Real profs of  throw up are TEE, IZ, DY 167, PI, IN, LE, TO, OI, FI aka VINNY, TI 149, CY и PEO. Peak of whole cars as well as throw up took place in 1975-77. Following TRACY 168 and CLIFF 159 writers such as BUTCH, CASE, KINDO, BLADE, COMET, ALE 1, DOO2, JOHN 150, LEE, MONO, SLAVE, SLUG, and DOC 109 CAINE ONE have struggled NY sub with lots of whole cars.

During 1978 to 1981 rebirth of graffiti occurred. TDS, TMT, UA, MAFIA, TS5, CIA, RTW, TMB, TFP, TC5 and TF5 were creating at that period. MTA has stopped bombing by claiming those writers illegal.

In  1980 authorities applied measures to illegal writers thus limiting their activity. Writings were removed from the sub, violators could be arrested. It was the time when many people gave up painting the sub but concentrated on writing.
While some writers began their careers in hot paces such as «ESSES studio», «Stephan Eins' Fashion Moda» and «Patti Astor's Fun Gallery». Those galleries added to graffiti being popular around the world. In 1979 LEE QUINONES and FAB 5 FREDDIE with famous art dealer opened a gallery in Rome.

From 1982 to1985 officials severed measures against graffiti and writers. Increasing criminal situation played its negative role: to feel secure writer when painting had to keep his gun near himself.

Most writers gave up practicing graffiti in sub but some viewed as a challenge and continued to intrude into rail yard and paint wagons. The number of conflicts between writing bands rose since they didn’t want to share their territories with anyone. Most remarkable writers who continued bombing in the sub are SKEME, DEZ, TRAP, DELTA, SHARP, SEEN TC5,SHY 147,BOE,WEST,KAZE,SPADE 127, SAK, VULCAN, SHAME, BIO, MIN,DURO, KEL, T KID, MACK, NICER, BRIM, BG 183, KENN, CEM, FLIGHT, AIRBORN, RIZE, JON 156, KYLE 156.

OLD SCHOOL époque in graffiti thus came to an end.