Blackbook, piecebook, sketchbook is a notebook where a writer can make sketches. Then sketches can be copied on a wall.

Bomb  (or throw-up) is a drawing, made as a rule in a very short time, in “bubble letters”, and reflects the name of a crew or a writer. It is painted in colours. The most popular are black and silver (white), yellow and red.

Bubble letters is the most popular graffiti style. Letters look like soap-bubbles. It is usually used for throw-ups.

To buff means to paint out the piece. As a rule, these measures are carried out by the government, or workers of the Housing and Public Utilities, or by the team of “antigraffiti”.

Burner  is a bright and distinguished piece.

Cap is a nozzle for a cylinder. It helps to regulate the thickness of a line. There are two types of nozzles – male and female. Male and female nozzles are divided into fat caps (make thick lines) and skinny caps (make thin lines).

Crew is a team of writers

Daim style (FX style) is one of the graffiti styles invented by Daim. 3D letters are painted without outlines.

Dope, sick, ill, cold, off tha hook, the shit are the equivalents of the words “cool”, “really nice”, etc. typical of hip-hop.

Outline is to outline a letter, a shadow, etc. in colour.

Piece – (masterpiece). It is a graffiti that allows to judge about the writer’s skills and craftsmanship.

Side-to-side is a stretched or repeated along the whole carriage  piece.

Sketch is a colour or black and white sketch.

Taggers are people who paint only tags.

To bomb – to draw graffiti at a very rapid pace.

To cross out – to draw a picture on a picture of another writer. This act is considered as disrespect, and provokes the problems and enmity between writers or even crews. 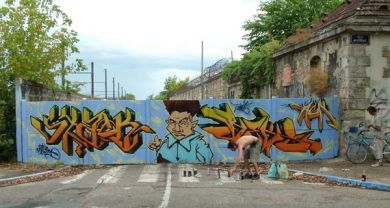 To get up – to go for bombing, piecing.

To piece – to paint graffiti.

Top-to-bottom - piece, covering the whole surface of a carriage from the top to bottom.

To rack some cans - to stole cylinders with paint.

Toy - 1). a beginner ; 2). A person who has to paint graffiti for some reasons. As a rule, they do not want to learn and to develop their skills. Writers do not respect and even despise such people.

Wildstyle  is a very difficult for reading style. It is like the height of a writer’s craftsmanship. It is important not only to chose the contours in a right way but also to mix colours correctly.

Whole car is a piece or throw-up covering the whole surface of a carriage.

Writer is a person who paints graffiti.

Yard, train yard is a depot for trains. First, it was considered as a depot for underground trains. But because of the writers’ attention to the overland and goods trains depots are called now yards or freight yards. 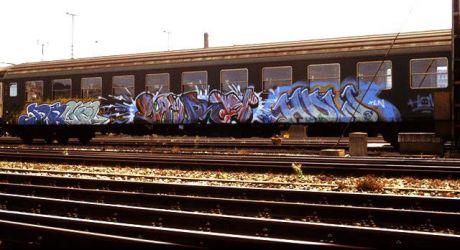