The 18th century. Rescript of emperor Pavel I 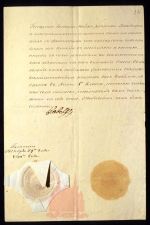 Rescript of emperor Pavel I to marching ataman, general-mayor A.K. Denisov on awarding him the order of St Anna 1-st degree for bravery and alertness he showed in battles with the French during the crossing of Switzerland's Alps. Signed: “Pavel”. Gatchina, 29th October 1799.

Material is provided by the State Historic Museum.