Home  /  All about calligraphy  /  Graffiti  /  Kinds and Styles of Graffiti

Stencil art is a graffiti style. Stencil is a special device used for painting different coverings with identical symbols, numbers and diverse figures. Usually stencils are painted either with a dark paint on a light ground or vice-versa, the major condition is contrast.

Writers’ attitude towards stencils can be extremely negative or positive. From the first point of view while painting stencil destructs personal element, the latter often use stencils for their tags in order to quickly sign paintings. 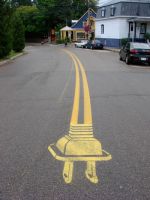 How does stencil look like? As a rule it’s not a large list of transparent coat or paper with a few carved segments forming the initial image. When working the picture divides into segments in such a way that to prevent stencil being tore while making draughtsmanship.

One of the most famous stencil is a writing ‘Civilians! During artillery bombardment this side of street is the most dangerous!’, made in Leningrad in the years of Great Patriotic War. It has been preserved and nowadays is placed in St Petersburg on Nevsky prospect, 14. In 1962 marble memorial desk was put on the wall of this house with the following text “In honor of heroism and courage of Leningradians in the days of 900day city blockade the very writing is preserved”.

There are plenty of ways to make stencils. Text or a simple picture can be transferred on a piece of cartoon and then laminated and used according to its role.  Complicated pictures are better painted with help of graphic editorial programs (Adobe Photoshop, Corel Draw).

For beginners it’s simpler to paint in pairs: one holds a stencil, the other sprays the paint. Don’t neglect the ground: sometimes the picture is better-looking in less popular place but on a better ground.