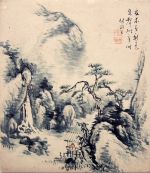 Japan, the country of the rising sun, has always attracted and inspired people. They created legends, poems and songs about the beautiful country. Being remoted from the rest of the world, Japan formed its own different civilization. Like all Japanese culture, the national painting is also unique.

The basis of the Japanese painting of Tokugava era is formed by Chinese tradition later enriched with Japanese and European artistic methods. During the period of Chinese school domination, the Kano school was the foremost trend of painting. The artistic methods applied by the artists of the era are characterized by correlation of the conventional decorative treatment of the depicted subject and specious representation of the separate details. Many talented artists belong to the school, including the spectacular Kano Eitoku and Kano Sanraku.

After the decay of the “emakimono” style it was replaced by the dzen-like ink painting which was called “sumi-e”. It comes outside the frameworks of the monastery traditional painting and becomes an integral part of the secular art. 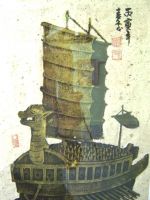 Ukiyo-e (“pictures of the floating world”) is one of the most popular styles of the Japanese fine art of the Edo era. Created in the early 1600’s it decayed in the late 1800’s. Late 1700’s and early 1800’s are said to be the “golden age of ukiyo-e”. The style was invented by the urban citizens who took the scenes of the merchants and craftsmen’s lives as the subject matter for their paintings. As a rule, the two prominent artists of the era, Hisikava Moronobu and Sudzuki Harunobu are said to be the authors of the genre. By the way, Sudzuki Harunobu acted as the main agent of the genre subversion being the first to work out and apply the full-color engraving technique. The artistic value of Ukiyo-e had long been neglected and considered to be “lower art” in Japan.

Soon landscape became the preferable subject matter for the paintings. Katsushika Hokusai is considered to be the foremost landscapist of the Takugava era. He is also known as the inventor of the manga paintings. The sequence of his works included into the 36 Views of Mount Fudji series first presented Fudji as the symbol of Japan.  Hokusai and his followers longed to free the Japanese painting from Chinese influence.