Hebrew alphabet (alefbet) consists of 27 consonants .The russian word «алфавит» as its analogues in many other languages emanates from the first two letters of hebrew  - “alef” and “bet”, along with it one can be pleased  with  the fact that 5 letters of russian alphabet  emanate from hebrew - Ж, Ц, Ч, Ш и Щ.

Ashur type  is used in a sacral hebrew calligraphy

Sacral hebrew letters called “ashur” or “Assyria” type (ktav ashuri) fundamentally differs from letters of  all other languages of the world.

In other languages letters pose itself only as general graphic signs for letters and sound imaging in writing. The letter poses itself only as a coherent sign. These letters can be easily replaced with any other ones without any missing. There are 22 letters in the Sacral language. Five of them have another final form that is used by the end of a word in writing. This forms 27 written signs of the Hebrew language totally.

The sacral things  of the ashur type

Every letter is an eternal spiritual substance that had emerged long before the creation of the world in the ashur type that was used to create the ten commandments on the tables of the testament.

Be careful of letter misspelling that can shatter the fundamental basis of the creation and damage spiritual substance connection.

27 letters of the sacral alphabet

The  easiest way to illustrate the matter we spoke above is to show the necessary standards of the  22-nd letter writing (“tsadi”) (to the right) that consists of  letters “Yod” and “Nun”. 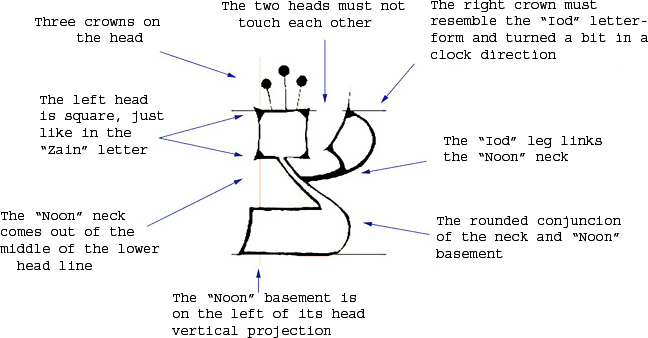 Some rules of sacral texts writing

Texts written with the  easiest declinations from the rules of writing are incorrect and can’t be used.

In some cases it’s allowable to correct the mistake and in other cases it’s forbidden.

For example – mezuzah letters must be written from the right to the left in the same order they are read in the Tora (kesidran).

It`s like a bead threading – if you missed one bead one should break up the whole string you `ve done before the mistake.

If a copyist missed one letter while writing or its element in a mezuzah he must erase or cut everything he wrote after the missing part to put in the missed letter and only after this continue writing.

But this is not the whole view of the situation. One can find the names of the Creator in a mezuzah 10 times. The mezuzah can’t be corrected if: one of the names has already been written meanwhile there is an omission of one letter or its element before this name in the text and to correct the omission, one should erase everything after the mistake but it’s forbidden to do this as the name of the Creator can’t be erased.

In other cases later on letter correcting that can’t be determined can deprive the mezuzah of its spiritually guarding power. Only the God-fearing of a copyist can provide the necessary power of the mezuzah.

There are very strict demands concerning the ink. It must be black without any gradation and must be resistant for centuries. They must include only special ingredients.

At the present time ink include soot and balls that grow on the leaves of oaks, wood resin and sulphate of copper that makes them indelible. To write in ink on a special parchment or bamboo feather or quill (kalam or kulmos)(that is fined in a proper way) is used.

To be a licensed copyist it`s necessary to pass serious exams in the theory and practice of sacral hebrew text writing .