The history of Russian writing

The history of Slavic and consequently Russian writing forming differs fundamentally from the one of the Latin language. Virtually very little is known about the time and language forming conditions and thus scientists sayings are controversial. Many questions haven’t been answered even now.

Alphabets that became a basis for Slavic writing are called glagolitsa and kirillitsa. The history of their beginning is totally unknown. One can judge upon the ancient form of glagolitsa only approximately as extanted monuments of glagolitsa are no later than the end of the 10th century. Looking through glagolitsa one understands that its forms are very ingenious. Symbols as a rule are composed of two elements that are combined one above the other one.

Such like construction can be seen in the decoration of kirillitsa. It doesn’t virtually include simple forms. They are connected with straights. Individual letters (ш, у, м, ч, э) correspond to the modern form. Resting upon the form of letters one can speak about two types of glagolitsa .The first one - Bulgarian glagolitsa – has roundish letters and Croatian glagolitsa known also as illyrian or dalmatian has angular forms of letters. Neither of the two types has strict border zones of spreading. Later glagolitsa borrowed many sounds from kirillitsa. Glagolitsa of west Slavic people existed for not a long time and was replaced with Latin writing. As for other Slavonic writing similar to kirillitsa was taken for writing. But glagolitsa is not yet extinct. Up to the beginning of the World War Two it was used or at least even now it’s being used in Croatian settlements of Italy. The type was used even for newspapers.

Its origin isn’t totally known as well. The title appeared later than the alphabet. There are several theories about the origin of kirillitsa and they have different levels of believability. Kirill in connection with his touring across Slavic countries.

In the middle of the 9th century Kirill had definitely composed some new Slavic alphabet. It`s not known whether it was glagolitsa. It was necessary to translate religious texts into the Slavic language and to do that one should simplify ingeniously complicated and difficult-to-write symbols of glagolitsa and introduce lacking letters for sound denotations in the Slavic language.

Many sources of that time describe this but mention only one Slavic alphabet although there were already two of them. The kirillitsa alphabet has 43 letters. As many as 24 of them were borrowed from byzantium paternal writing and the other 19 were invented anew but in the graphic decorations were similar to the first ones. But not all borrowed letters survived denotations of the same sound that is in Greek language – some got new denotations peculiar to Slavic phonetic features. Kirillitsa remained mostly unchanged with Bulgarians to a greatest extent of all other Slavic people. But now their writing is the same as the Serbian one and is similar to Russian writing except several symbols are designed to designate some specific phonetic features. The ancient form of kirillitsa is called ustav. Ustav and glagolitsa are types of writing peculiar to a copy-book one. It, as well as glagolitsa, has its peculiar trait - clearness and straightness of tracings (writings).

Most letters are angular and have graceless features. Exceptions are narrow roundish letters with round curves - (О, С, Э, Р and others) and among other letters they seem suppressed. Lower elongations of some letters (Р, У, 3) are peculiar to this type of writing. They appear to be a light decorative element in the whole context. As for diacritical symbols they are still unknown. Letters of ustav have a large type and are set separately from each other. The old ustav has no intervals between words. 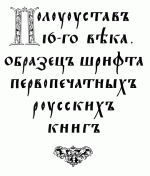 Semi-ustav is the second type of writing development from the 14th century that later replaced ustav. This type is brighter and more roundish. Its letters are shallower: has many superscript marks and the whole system of punctuation marks. Letters are more flexible and wide in comparison with ustav writing and have lower and upper.

Elongations. The character of wide-tipped brush using that was applied in writing by ustav type is much less noticeable. Semi-ustav was used with cursive and ligature in the 14th-18th centuries along with other writing styles.

To use semi-ustav in writing was much simpler. Feudal atomism caused a development of their own ustav styles and ustav language in remote districts. Genres of military novels and chronicles becoming the main parts and render events russian people passed through in that period. During Ivan the third ruling when land integration and consolidation around Moscow was finished and the national russian state was created with a new autocratic regime.

Moscow became not only a national but also a cultural center in the 15th century. So the district culture of Moscow was getting the national character. Along with the growing demand of everyday life the necessity of a new and more simplified style for more convenient writing emerged.

During Ivan the third’s ruling when land integration and consolidation around Moscow was finished and the national Russian state was created with a new autocratic regime.

Moscow became not only a national but also a cultural center in the 15th century. So the district culture of Moscow was getting the national character. Along with a growing demand of everyday life the necessity of a new and more simplified style for more convenient writing emerged. That was cursive writing. The term “cursive writing ” corresponds to the term of the latin cursive one. In the initiatory stage of writing development ancient Greeks had writing in widespread use and partly south-west Slavic people had it. Cursive writing as a separate type of writing emerged in the 15th century in Russia. Its letters partly bounded with each other differ from letters of writing types with its bright patterns. But as letters had different marks and signs and pigtails and additional symbols.

It was difficult to read texts. Although cursive writing reflects semi-ustav and there are little lines that bound letters.

In comparison with semi-ustav this writing is more flexible and fluent in the 15th century. Letters of cursive writing were written with elongations.

In the beginning symbols were composed of elongations as it`s peculiar to ustav and semi-ustav. In the second half of the 16th and especially in the beginning of the 17th century semi-roundish lines became major writing lines. If one takes the whole context one can see some elements of Greek cursive writing.