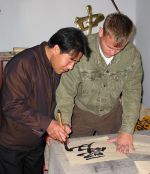 All the hieroglyphs are written in accordance with the certain rules. The structural element of a hieroglyph is called a stroke. There are 14 such strokes in total. They differ from each other by the place they occupy in a hieroglyphic structure and curves. Thus, calligraphy of a hieroglyph is actually a certain succession of strokes inside it. It is rather unusual, but some hieroglyphs have not only several meanings but also several variants of writing.

The basic rules of hieroglyphic writing: 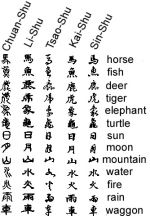 Traditions of writing Chinese hieroglyphs are closely connected with development and formation of writing in China. We can speak about the following styles:

First two styles were very popular in Ancient China. History of Japanese calligraphy is known to be closely connected with Chinese one. We can single out the following calligraphic styles of writing Japanese hieroglyphs:

Kaisho (uncial) is rarely used. Lines are strict and clear. Hieroglyphs become square and angular, seem like typographic ones. They look like signs from Katakana.

Gyousho (semi-uncial) is very similar with the signs from Hiragana. This style is characterized by smooth lines. Gyousho is a median style that is not as stiff as Kaisho or as sweeping as Sousho.

Sousho (cursive) is a flowing style composed with swift strokes. Its fee movement and beauty has made Sousho the most popular style with calligraphy masters.

All the calligraphic styles in Japan were based on interconnection of written text with esthetic pleasure. During the Edo Epoch (1603-1868) two decorative styles were widely used – Kabuki-Modzi and Dzoruri-Modzi. As a rule, they were used for show bills and programmes of Dzoruri and Kabuki theaters.

Styles of writing hieroglyphs of Chinese and Japanese calligraphy are not limited to the mentioned above, but they are the basic ones.