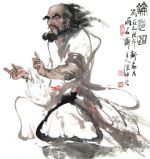 China is an amazing unusual country which has always attracted the strangers and wanderers. The longest architectural construction in the world, the great Chinese Wall is in China. It is the motherland for such genial poets as: Lu Tang, Wang Wei, Li Bai, Tao Qian.

Chinese painting is unusual and unique. There are several basic genres of the Ancient Chinese painting: portrait and landscape, and “flowers and birds”.

The term “traditional Chinese painting” was invented to duffer it from the Western one: it appeared in China in the 17th century.

There are two basic styles of the Chinese painting: “Gong-bi” (often referred to as “court-style painting”) and “Xie-yi” (“free-hand style”). 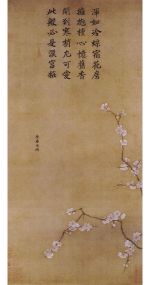 The paintings executed in the Gong-bi style are more precise and elaborate in depiction of every single subject and detail. Having made the delineation, the artist paints the picture with mineral ink which makes it brighter and more expressive. The “gong-bi” used to be extremely popular at the early stage of the Chinese painting development. Up to the 12th century approximately the interiors of the Emperor’s palace and aristocratic houses had been executed in this manner.

The “Xie-yi” style gained popularity at later stages of the painting development. This kind of style is more expressive and free. The “gong-bi” style was compulsory for the professional artists; and the latter became popular with the intellectual artists.

The brush application is typical for Chinese painting and is explained by the technical differences between the East and West. In China application of one and same instrument (brush) for painting and handwriting joined the two kinds of art, whereas in Europe calligraphy was a separate kind of art.

In China the combination of text and image assumes the philosophic implication. Often an artist signed his picture and entitled it, but even more often the expressions in the picture added or highlighted the significance and value of the painting.

Nowadays we are able to comprehend the spiritual heritage of China and Chinese people through their national art, including Chinese painting and calligraphy.