China, Japan and other Islamic countries 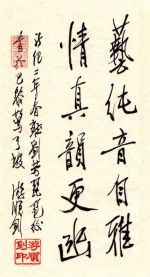 Chinese calligraphy is said to be the  forefather of the japanese one.The first mentions of  it date back to the middle of the  2-1-th  millenium b.c.,meanwhile the history of the japanese calligraphy  dates back to the beginning of the 5-th century b.c. It was that period when  first patterns of the chinese hieroglyphic writing began to spread across japan and calligraphic writing uprose in the 7-th century.

In  chinese the term “calligraphy” is translated as “shufa” (writing rules) and along with it shitsui (chenese theatre) can  express peculiar traits of  the chenese artistic mentality more thoroughly. First calligraphic inscriptions appeared on shells “dziagunen`” in Chine. During Tsi Shi - huandi ruling a new style of writing was affirmed – siaochjuan – writing on small seals and was used for imperial documents.

By the end of Han dynasty the  calligraphy art achieved a  very high  level that was due to the perfection of calligraphy skills. 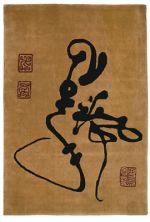 As for Japan calligraphy is the most spread sphere of arts,national interest, general esthetic mentality brought up from the very childhood. Japan Chinese writing borrowings are connected with spreading of Buddhizm in Japan.In the length of time  japanese began to adapt borrowed hieroglyphs to write in their native language. Gradually  japanese penmen turned away from styles of writing imposed by the Continent, creating their own artistic elements.The term ”Sampitsu” (“three brushes”) began to be used for the three most outstanding penmen  - monk Kukai (774-834), the  Emperor Saga (786-842) and Tachibana-no Hajanary (a court) (died in 842y.).

It`s an interesting thing that in japanese the translation of the term “calligraphy”is Shyodo (the way of writing).The way of calligraphy  Shyodo laid from China to Japan.

In Chinese calligraphy the most important thing is energy and power of the brush.

According to the divisions between  japanese and chinese calligraphic styles, defined by  S.N. Sokolov-Remisov  - “Feeling of touch by the brush on the paper  plays  the leading role here. As for the japanese calligraphy surface power of brushstroke gets the crucial meaning,the most important in  its  language is a gesture,dance and not feeling of touch, or insight ”. 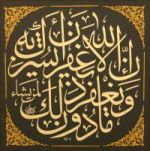 In arabic calligraphy is “hatt or hutut”.Iriginally islamic calligraphy emerged on the basis of Koran coping that is said to be Allah creation.In this terms the written word has got a sacral meaning.

The first arabic writing is conventionally said to emerge in  the first centuary of hidjra – the 7-  th a.d. It`s worth mentioning that by that time the arbic alphabet had virtually  formed but not completely. The archaic writing was rather  primitive and had been used in Arabia  since  islamic state forming there at the time of  Muhhamed anf first califs . The form of letters was taken from  fomer Semitic handwritings.Orthography emerged later – the necessity of text wovelization ripened only by the end of the 7-th centuary .The early arabic writing  virtually imitated the  syrian one.As for the most outstanding arabic penmen one can mention Abu Ali ibn Mukla (886-940y.), Abul –el –Hasan Ali b.Hilal – born 1022y, Yacut al-Musta` Simi – died  in 1298 a.d.