In the Benedictine tradition of reverence for human thought and creativity, the Hill Museum and Manuscript Library preserves manuscripts, printed books and art at Saint John's University and undertakes photographic projects in regions throughout the world. HMML is the home of the world's largest collection of manuscript images and of The Saint John's Bible, a handwritten, illuminated Bible in modern English. HMML's collections reveal how various cultures express their religious, artistic, and intellectual experience. HMML makes these resources available to students, researchers and visitors through advanced technology for imaging, cataloguing, and teaching.

The photographic preservation of manuscripts has been the core mission of the Hill Museum and Manuscript Library for forty years. HMML has preserved more than 100,000 manuscripts on microfilm and in digital form. Since 2003, HMML has been capturing manuscript images through high-resolution colour digital photography. As of spring 2007, HMML has achieved a preservation milestone with their digital collection surpassing one million files! HMML also has its own collection of significant manuscripts, rare books and facsimiles.
HMML's manuscript holdings fall into two broad categories: 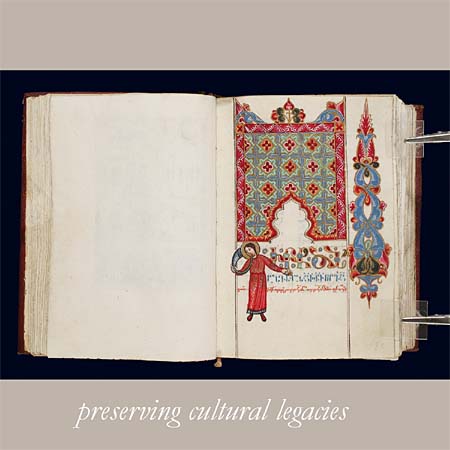 The vast majority of HMML's photographs of western manuscripts reproduce texts that predate 1550, touching on virtually every field of study relating to the Middle Ages and Renaissance. The collections are particularly strong in theology, history, literature, philosophy, and music. Nearly half of HMML's western holdings derive from libraries in Austria and Germany, but HMML also houses significant collections from Spain, Portugal, Switzerland, and England. It holds archival materials, and of particular importance are the Archives of the Knights of Malta, housed in the National Library in Valletta, and the Archives of the Roman Inquisition, located at the Cathedral Museum in Mdina. Currently HMML is photographing the Latin manuscripts of the Royal Library in Stockholm and the archives of the Rome Priory of the Knights of Malta.

In addition, HMML has augmented its collections through the purchase and gift of materials from libraries located throughout Europe, North America, and the Middle East.