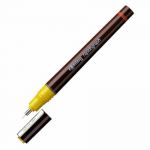 A technical pen is a specialized instrument used by an engineer, architect or draftsperson to make lines of constant width for architectural, engineering or technical drawings. It has been also generally called "rapidograph", although that particular name has officially remained a proper name for a line of products made by German company Rotring. Comparing with pens it has an important advantage: one need not fill it up constantly. Rapidograph is equipped with a tube and a special bottle of ink. Inside the tube there is a thin point which makes ink flow constant and reliable.

Prototype of rapidograph was a reisfeder (germ.) – a tool for drawing ink and colour lines on paper. It had only one serious drawback: it was impossible to regulate width of lines and that could become a reason for blots.

The situation changed in 1928 when specialists from the Rotring Company had invented the first ink pen called Tiku (Inkograph). Nib was replaced with a tube. So, the appearance of blots became impossible. In 1953 on the basis of Tiku there was designed a prototype of a technical pen – Rapidograph. It secured even ink flow and possibility to draw line of certain width. Rotring was the first company which invented such a unique tool.

Among the main manufacturers of rapidographs one singles out Faber, Castell, Rotring, Koh-I-Noor, Pentel.

We can point out one more type of the rapidograph – isograph by means of which one can write at any angle.

Rapidograph consists of a hollow nib with a thin point with weight inside and a plastic body with an ink cartridge. Thanks to weight the point goes up and down and its round nib allows to draw lines in any directions. Tip of the rapidograph lets draw lines of the same width.

While drawing with the rapidograph one should be very careful because this technical pen is a very fragile. It also needs constant attention. Generally the rapidograph is used by designers, architectures, graphic artists, engineers, etc.