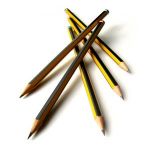 For many people pencils are associated with childhood . Every child learns painting with felt-pens or pencils, but more often with pencils.

Russian word for pencil “karandash” derives from combination of two Turkish words – “kara” (black) and “dash” (stone). It is a writing device wooden shaft-form with slate heart. Pencil as a writing instrument is known for four hundreds years already.

They are divided into lead and color pencil. Lead pencil writes as a rule in grey. According to slate hardness it is identified with letters M (В) – soft, and Т (Н) – hard. Semi-hard apart from  ТМ and НВ can be marked with F letter. In USA there are used numerical marks instead of letters like in Europe and Russia.

Slate pencils began to spread since XVI, when English shepherds from Kamberland county had found Borovdal occurrence of slate bricks, which they used to mark sheeps. Due to similar color it was mistakenly thought to be lead , afterwards when they realized that it was slate  it was used for pointed sticks which were good for painting, but, unfortunately not for writing. Since than were soft and soiled.

In XVII slate were selling on streets. Due to its high fragile painters invented an alternative method of preserving the material: sticks were put between wood tablets, between twigs,  and sometimes wrapped in ropes or paper.

The end of XVII century , 1683 year is marked by the first mention wood pencil. German Nurnberg became the first town to produce pencils in a modern sense of word. German craftsmen, combining slate with sulphur and glue achieved material of a lower quality but cheaper price than pure slate. In order to conceive low quality, pieces of pure slate were put in both ends of a pencil, and in the middle was bad slate or now slate at all. Thus Nurnberg production could not boast popularity.

Time passed. In 1794 French scientist and inventor Nicola Jacques Conte invented first modern pencil. Parliament of England in the end of XVIII century prohibited slate exports from  Kamberland county, otherwise violators could be punished to death. Nevertheless, slate smuggling delivered гit to continental Europe that lead to rise in prices. So Convent of France ordered Conte to elaborate technology of combining powdered slate, clay, farina, smut and water in order to produce high-quality  holder. Due to high-temperature processing real hardness was achieved,  change in proportions allowed to produce holders of various hardness, that is now the basis of pencil hardness classification.

In the end of XIX century count  Lotar von  Fabercastle  noticed that pencils with normal cross-section unsteady when it comes to downward writing surface and he suggested alternative variant  that is six-sided form pencil.

Mechanical pencil was invented in 1869 by Alonso Townsand Cross: slate holder was placed in a metallic tube and could if needed to be advanced on the according length. This invention influenced development of goods which are now commonly used.

Besides, “chemical”(or “copy”) pencils  have been produced. They aimed at filling in documents with carbon copy: fountain-ink pen didn’t provide enough pressure on paper. Reduce and following cease in producing copy pencils was a consequence of ball-type  pens introduction.