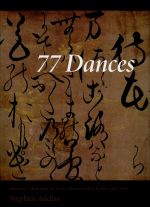 The first book on Japanese calligraphy from the significant Momoyama and Edo periods (1568–1868), 77 Dances examines the art of writing at a time when it was undergoing a remarkable flowering, as illustrated by over one hundred sumptuous illustrations. Everything from complex Zen conundrums to gossamer haiku poems were written with verve, energy, and creativity that display how deeply the fascination for calligraphy had penetrated into the social fabric of Japan. Examining the varied groups of calligraphers creating works for diverse audiences will show how these artistic worlds both maintained their own independence and interacted to create a rich brocade of calligraphic techniques and styles. The book begins with basic information on calligraphy, followed by six main sections, each representing a major facet of the art, with an introductory essay followed by detailed analyses of the seventy-seven featured works. The essays include: The revival of Japanese courtly aesthetics in writing out waka poems on highly decorated paper The use of Chinese writing styles and script forms Scholars who took up the brush to compose poems in Chinese expressing their Confucian ideals Calligraphy by major literati poets and painters The development of haiku as practiced by master poet-painters The work of famous Zen masters such as Hakuin and Ryokan.