Books: from Ancient to Modern Times

Explanatory dictionaries give the following definition of the word “a book”: A book is a set or collection of written, printed, illustrated, or blank sheets, made of paper, parchment, or other material, usually fastened together to hinge at one side. A book produced in electronic format is known as an e-book.

When people could not write they passed knowledge from mouth to mouth. When writing systems were invented in ancient civilizations, nearly everything that could be written upon—stone, clay, tree bark, metal sheets—was used for writing.

Papyrus, a thick paper-like material made by weaving the stems of the papyrus plant, then pounding the woven sheet with a hammer-like tool, was used for writing in Ancient Egypt, perhaps as early as the First Dynasty, although the first evidence is from the account books of King Neferirkare Kakai of the Fifth Dynasty.

The Greek word for papyrus as writing material (biblion) and book (biblos) come from the Phoenician port town Byblos, through which papyrus was exported to Greece.

In Middle Ages books were closely interconnected with the Christian traditions: that is why  the clergy were the predominant readers of books. Before the invention and adoption of the printing press (Johan Guttenberg, XVth century), almost all books were copied by hand, making books expensive and comparatively rare.  There were five types of scribes: 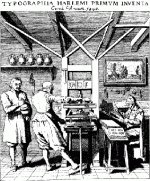 The first books used parchment or vellum (calf skin) for the pages. The book covers were made of wood and covered with leather. At first books were copied mostly in monasteries, one at a time. With the rise of universities in the 13th century, the Manuscript culture of the time lead to an increase in the demand for books, and a new system for copying books appeared. The books were divided into unbound leaves (pecia), which were lent out to different copyists, so the speed of book production was considerably increased.

Then at the beginning of the XIVth century the technology of xylography (woodblock printing technique, a relief image of an entire page was carved into blocks of wood, inked, and used to print copies of that page). And in XVth century the first printing press was invented by Johan Guttenberg. 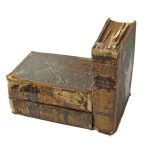 The first papermaking process was developed in China during the early 2nd century. Through the Moslem countries it came to Europe. Firstly paper was made from cloth. Together with new technologies there appeared an opportunity to use new material in paper manufacturing – cellulose.  Only in the end of the XIXth century paper became widely used. At the same time steam printing machines and later monotype and linotype presses were used. In the middle of the XXth century the number of books increased (200 000 copies).

Nowadays people keep to love reading, getting to know the world and taking a rest with heart and soul.