Origins of Calligraphic Illumination of the Holy Bible in Belarus

The first East Slavic copy of the Bible, “Gennadievsky”, was written in Novgorod Veliky in 1499 and was very modestly decorated. The book was written in semi-uncial font and decorated with one headband and small cinnabar initials.

The corpus of richly ornamented Bibles created in Belarus from 1502-1507 is the finest sample of a Cyrillic book art. The book calligraphic design is gorgeous, and the only miniature in the book represents the subject of Sophia’s (God’s Wisdom) personification. The manuscript of Matvei Ivanovich (Matvei Desyatov), called “Desyatoglav”, is now kept at the Academy of Science at Vassilievsky Island in St Petersburg.

The book which this year marked its 501st anniversary has an exceptional fate. The beginning of the story and biography of the author of the first copy of the first Belarusian Bible are well-known (which is very rare for such ancient documents) due to the last page with the large postscript of the author. The postscript is entitled “About the Author of This Book”.

The copyist informed us that he came from the town of Toropets and was the tenth son in the family (this explains the origin of his nickname: Matvei Desyatiy means “Matvei the tenth”). Matvei was proud of his brother Euphimiy being the abbot of the Monastery of John the Forerunner in Polotsk. The Polotsk Evangelistery of the 14th century from the Monastery of John the Forerunner contains the following note dating 1507: “There were some kind men, the abbot of St John’s Monastery Euphemia Toropka with the fraternity…” The nickname of St John’s abbot, “Toropka” which means “from Toropets” proves the words of Matvei Desyatov. We can suppose that his brother, the abbot of Monastery of John the Forerunner, introduced Matvei Desyatov to Francysk Skaryna a native to Polotsk. Both translators of the Bible belonged to one social background.

“Desyatoglav” by Matvei Ivanovich is written on 545 large sheets (30.7x19.5 cm) and contains most books of the Old Testament and the full version of New Testament. Inclusion of the unfinished “Menander” is not an unusual thing for Slavic Middle Ages. It was often copied together with the “Pchela” (Bee) corpus and the Bible texts: the Sophia; the Book of Proverbs and Jesus, the Son of Sirach. 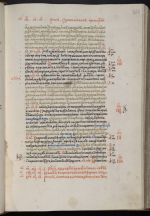 The 35 lines of the text are placed so that big margins are left on each page. The margins contain numerous notes made by the author himself and later the owners of the book. The calligrapher put the numbers of chapters and beginnings, indicated parallel readings, inserted the omitted words, and put the cryptographic sign of a hand with the drawn forefinger which was equal to NB in the Slavonic tradition. In a brief Introduction Matvei wrote that Bible texts were like combs “containing many in one”.

Calligraphy of “Desyatoglav” is exquisitely designed, has a rich and varied decoration. Matvei’s handwriting is changing as his work goes on. Sometimes it is tiny, and sometimes it is large and rough (letters measure 2-3 mm). In some cases it depended on the ink structure and sharpness of goose (swan) feather pens. The beautiful handwriting and wide margins of the book, regular interchange of brown and red ink make a fine aesthetic impression. In the New Testament the text is written in gold and blue. The citations from the Old Testament and words of Jesus Christ are written in gold, whereas the notes introducing direct speech are highlighted in blue. Thus, if the pages of the Old Testament impress with delicate and harmonious decoration, the New Testament astonishes with luxury and artist’s fantasy. The genius calligraphic art of Matvei Desyatov allowed him to use a written line as ornamentation. For instance, among the loops and quirks of the letters in the phrase “My soul worships my Lord, and my Spirit rejoices Lord, my Savior” are hidden the letters of the name “Matvei the 10th”.

The interwoven ornament of the headings including the heading of St Luke’s Gospel is written in Greek and coloured red. There is an unusual detail in the decoration of the Lamentations of Jeremiah. In its Jewish variant the first four chapters are divided into 22 sections according to the number of letters in the Jewish alphabet. And each letter is put in the heading of its part. The order was preserved by Matvei Desyatov. The margins of the five chapters contain Jewish letters and their names in Cyrillic. Non-Cyrillic Greek and Jewish letters render both the meaning and aesthetic component. The headings are painted in different colours: sometimes they are red, gold, blue or sometimes the colors are mixed. The 250 large gilded initials are another fine decoration of the book. With 20 coloured vignettes with floral and leaf ornament open large sections of the manuscript.

At the beginning of The Book of Psalms there is a three-part miniature the subject of which originates from the apocryphal legend “The Book of Psalms by King David”. The upper part of the miniature describes the unction of David and writing of the Book of Psalms from Sophia’s (God’s Wisdom) dictation. The two others describe the execution of the psalms: in the middle King David is singing a psalm, the musicians are around him, and Idiphum, the leader of the dance circle, is teaching the young men to dance; at the bottom of the dance circle the teacher Asaf also teaches dancing and a group of people sing psalms. The figures of both dance teachers are painted on the left margin beyond the framework of the miniature.

The most prominent nobility of the Grand Duke’s court wished to have its own Lithuanian-Belarusian copy of the Holy Bible which would be no worse than in neighboring Novgorod. It was a matter of prestige for Orthodox Lithuania to have a full translated version of the Bible. For the Grand Duke of Lithuania Alexander Yagellon such a book was an important tool in the political struggle with his father-in-law, the Great Duke of Moscow, Ivan III who owned the only Gennadievsky copy of the Bible made in Novgorod. 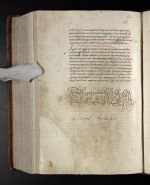 Matvei wrote in the subscript that the work started: “in the town named Vilni ruled by the Great Duke Alexander, the former King of Poland, Great Duke of Lithuania, Russia and Zhomoitsk, and metropolitan of Kiev and all Russia Ion, and Vilni voivod Mikolai Radivilovich…”, and finished “at the Monastery of the All-pure Annonciation, named Souprasl at the lands of the blessed Christ-loving nobleman Alexander Hodkevich”. Meanwhile, in 1506 the King and Grand Duke Alexander Yagellon died at the age of 46 (there were rumours of his being poisoned). The new king Zhigimont I was reluctant to support the initiatives of his Orthodox people.

After the King’s death Matvei Desyatov supported by Alexander Hodkevich moved to the Supralsky monastery to finish the book. Perhaps, at the same time Matvei Ivanovich taught Hodkevich’s son, Grigoriy Alexandrovich, the future founder of the Zabludskaya Printing Office and patron of the printing pioneer Ivan Fedorov. In his postscript Matvei wrote he had copied the book without mentioning the author of miniatures, initials and headpieces. Perhaps they were made by the masters of Vilni Metropolitan Scriptorium.

Many centuries passed by. The gorgeous Codex copied by Matvei Desyatov was kept in the Supralsky Monastery, hidden in dense Belarusin forests, and the name of “the Polish gentleman Matvei Desyatov” was included in the Monasterial register (which shows he was not a monk). In the mid-1800“s the manuscript by Matvei Desyatov was taken from the Monastery by the teacher of the Zhirovitsky divinity school Pavel Dobrohotov, and in 1911 the book was granted to the Library of St Petersburg Academy of Science.

For many years the scientific community has been discussing the possibility of the facsimile edition of “Desyatoglav”. This book would be of great help for the historians of art and Slavonic Bible researchers and would be a fine addition to any book collection.